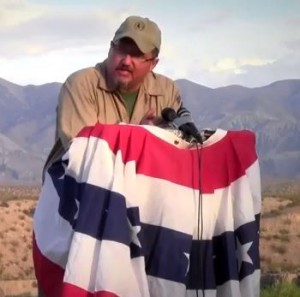 It was the imminent drone attack that finally did it.

Paranoid rumors are not only common at gatherings of antigovernment “Patriots,” they’re practically the entire raison d’etre for them. So when a wild and paranoid rumor began circulating – that Attorney General Eric Holder was preparing a drone strike on the armed militiamen who gathered at Cliven Bundy’s ranch in Nevada – it unleashed a rift within the camp, which is brimming with fear, rage, testosterone and firearms.

Vicious infighting among those remaining at the camp – estimated at less than a hundred – broke out a little more than two weeks after heavily armed militiamen forced federal agents to back down from a planned roundup of Bundy’s illegally grazing cattle from public lands. After vowing to stay on and protect Bundy – who then stumbled on the national stage with an outpouring of racist commentary – the remaining “Patriots,” who have been raising fear levels among local residents, have begun feuding. And it has been revealing.

Apparently, someone within one of the major factions at the camp, the Oath Keepers, relayed word of the imminent drone attack to his leaders. Oath Keepers founder Stewart Rhodes responded by pulling his people out of what they called “the kill zone” (the area the supposed drone would be striking). When the other militiamen learned that the Oath Keepers had pulled out, they were outraged.

As you can see in the video below, the angry militiamen – led by a Montana “Patriot” named Ryan Payne, who has been acting as the spokesman for the militiamen at the ranch – held an impromptu gathering at the camp to discuss the situation. They openly talk about shooting Rhodes and other Oath Keepers leaders – because in their view, the Oath Keepers’ actions constituted “desertion” and “cowardice” – and describe how “the whole thing is falling apart over there.” At the end, they vote unanimously to oust the Oath Keepers, or at least its leadership, from the Bundy Ranch camp.

PAYNE: We are open to gentlemanly conversation. But this man and the people that obeyed that order have violated my personal creed. You don’t f------ walk in and say, ‘I’m sorry,’ and you’re back in, brother. You can walk in and say you’re sorry, and you’re lucky that you’re not getting shot in the back. Because that’s what happens to deserters on the battlefield.

For his part, Rhodes and his fellow Oath Keepers are keeping a stiff upper lip about the rejection. Rhodes himself has returned to his Montana home, reportedly for a family birthday, and his underlings say he plans to return. Oath Keepers organizer Elias Alias (aka Franklin Shook) described the incident on the group’s website as an effort “to sabotage the Bundy stand against the government,” and reported that other “Patriot” movement leaders, including militiaman Mike Vanderboegh and Sheriff Richard Mack, remain firmly within their camp.

Yes, it is true: Oath Keepers received a bizarre bit of leaked info which could not be verified but which also could not be ignored. Our contact is connected with the Department of Defense – or ‘was’. The info we received stated that Eric Holder of the Department of Justice had okayed a drone strike on the Bundy ranch near Bunkerville, Nevada, within a 48 hour period over the weekend of April 26/27, 2014.

That, fortunately, turned out to be ‘dis-info’ – a false rumor. And though it came from a trusted source, Oath Keepers could neither prove nor disprove it.

In the ensuing panic at the camp, “Oath Keepers advised people there to consider evacuation,” Alias said. He referred to the angry reaction of the militiamen as “backwash”.

He also admitted that there was a great deal of contention about how $40,000 raised on behalf of the Bundy family through the Oath Keepers was handled, since the organization wound up only writing the family a check for $12,500.

Another YouTube video, which has since been removed, but transcripts of which were posted at DailyKos, revealed the depths of the militiamen’s animus towards Rhodes and his organization. One of them – the nominal “head of security” for the Bundy family, a man nicknamed “Booda Bear” – rants angrily:

My guys sleep in the dirt out here, we're on shifts for 14 hours a day and trying to make sure that this family stays safe and secure ... and just so everybody knows, as Booda, head of security for the Bundy Family I can swear on the white skin that covers my ass there will not be an Oath Keeper -- there WILL NOT BE AN OATH KEEPER allowed to set foot on the internal ranch property.

Alias responded to these slurs by suggesting that “Booda” and pals were actually FBI plants:

Some of the purported “leaders” of the militia at the ranch are doing exactly what any agent provocateur would do after having infiltrated the militia and claimed a role in leadership. Did you notice the massive ego about who is going to command who? Did you notice the drama in the tendency to speak of Oath Keepers as if we were a militia, which we are not. These militia “leaders” would judge us by battlefield standards even though there has not been a “battlefield” since April 12, 2014? They would shoot us for desertion? Really? That is amazing, and is the kind of bumbling consciousness which a conditioned and programmed special warfare officer or a federal agent would offer if he had to think on his feet of a sudden.

“Patriots” often talk about fighting what they see as a second Civil War in America soon. But as the militiamen at the Bundy Ranch are demonstrating, the civil wars they end up fighting are usually within their own ranks.