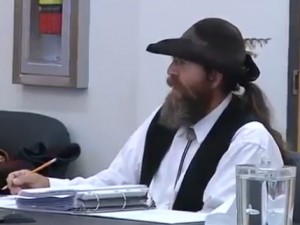 Ernie Wayne terTelgte likes to style himself as a Montana mountain man, dressing in buckskins, boots and tricornered hats and sometimes bearing an old muzzle-loading musket. He likes to elaborate upon his theories about so-called sovereign citizenship in a florid 18th-century style. But it isn’t a silly nostalgia act. The Bozeman man has, in fact, been challenging Montana’s courts and legal system in the name of his extremist belief system all while adopting anachronistic clothing and calling himself the “Natural Man.”

Asked to explain why he was fishing without a license, terTeltge told a judge: “I was searching for something to put in my stomach as I am recognized to be allowed to do by universal law,” he said. “I am the living man and I have the right to forage for food when I am hungry.”

This all could be written off as the peculiar antics of another kook with convoluted legal ideas – something not unheard of in Montana – but for the fact that terTeltge has amassed supporters locally and regionally. His fight with the courts over what began as a simple fishing citation has become the latest cause célèbre among the far right in the Mountain West, including the region’s antigovernment “Patriots” and associated militias.

Some have gone so far as to begin organizing “citizen grand juries,” another tactic of the sovereign citizen movement, which purport to allow ordinary citizens to present cases to the local sheriff and sit in judgment of local government officials. Indeed, terTeltge himself has played a leading role in helping to organize these “juries” in the Bozeman area.

These activities have a long history in Montana, including the Montana Freemen of the 1990s, some of whom were from the Bozeman area and who practiced a similar kind of “sovereign citizenship” theory in promoting their illegal moneymaking schemes. Indeed, one of terTeltge’s cohorts in forming a “citizen grand jury”, a Bozeman man named Steve McNeil, was heavily involved with the Freemen and was arrested at one of their trials in Billings in 1996. Other extremists, such as neo-Nazi Karl Gharst, have used “citizen grand juries” to threaten the Montana Human Rights Network.

In recent years, these ideas have been spread widely in places such as Montana through the auspices of the Tea Party movement, in which old “Patriot” movement ideas have commingled freely with mainstream conservative politics, to the point that in many parts of the state Tea Party ideologues are nearly indistinguishable from the militiamen who got their start there in the 1990s.

Ernie terTeltge appears to have gotten his start that way. He first appeared on the region’s political scene in 2010, leading a contingent of Tea Party demonstrators as they protested efforts to pass health care reform outside the Gallatin County Courthouse. TerTeltge was wearing his trademark mountain man outfit.

Then, in August 2013, terTeltge was caught fishing without a license at the Three Forks Pond, a state-managed area, and refused to give the game warden his name. He was subsequently charged with resisting arrest.

TerTeltge began demonstrating in front of the courthouse in Three Forks in early November as his court proceedings began. A video shows him holding up a cardboard sign and explaining sovereign citizen ideology to passersby on the street.

Then, on Nov. 19, he made a court appearance on the resisting-arrest charge in Three Forks before City Judge Wanda Drusch. It did not go well. He yelled at the judge: "Do not tell me to shut up! I am the living, natural man, and my voice will be heard!"

When Drusch got up to confer with law enforcement officers, terTeltge and his supporters peremptorily marched out of the courtroom, got in their vehicles and departed.

That tactic did not work for his next court appearance three days later, however. Once again, terTeltge tried to buffalo Judge Drusch with a flood of pseudo-legal language even as she warned him continuously that he would be found in contempt of court if he did not desist. Finally she ordered deputies to arrest him, and they did, handcuffing terTeltge as he protested: “I cannot give you recognition, I am constrained by the United States Constitution of 1789.”

Things got even stickier in January when he went before Justice of the Peace Rick West, who sent terTeltge back to jail, again for contempt, after he refused to remove his hat in the courtroom. This time, he had a larger crowd of supporters, but there were also over 30 law enforcement officers present to keep the peace. TerTeltge wound up spending 30 days in jail.

This incident threw local “Patriots” into a tizzy. One of terTeltge’s allies –William Wolf, a formerly homeless man who has been involved in efforts by Bozeman-area extremists to file for political office as Democrats – threatened to arrest Judge West as a “sovereign citizen,” setting local law enforcement even further on edge.

Then Wolf approached Gallatin County commissioners about forming a “citizens grand jury” to review claims of “human rights violations” in terTeltge’s case. The idea proved somewhat popular in Bozeman; one gathering attracted over 50 people to discuss forming what they saw as challenge to “corrupt government.”

At his most recent appearance in March, however, terTeltge was more contrite and cooperative. As a result, Judge West did not return him to jail, and he was freed until his trials begin. His fishing license trial is scheduled to begin next week.

“Patriot” movement leaders are watching the case closely. Chuck Baldwin, the former Constitution Party candidate now living in the Flathead Valley, recently returned from his visit to the Bundy Ranch standoff in Nevada and regaled an audience in Kalispell with tales of the militias’ exploits in Nevada. Then Baldwin urged his audience to pay similar attention to terTeltge’s case.

“I realize, we all recognize that everybody cannot up and leave and go a thousand miles away, depending on your schedule, your home responsibilities, et cetera. We understand that,” Baldwin said. “We still have to be watchful here in the state of Montana. We’ve got a situation in Bozeman, right here in our state, that we need to take care of, and we really need to rally around. You’ll be hearing more about that soon.”

All of this far-right activism concerns local government officials, who have become all too familiar with this brand of extremism in recent years in Montana. Jim Taylor, legal director of the American Civil Liberties Union of Montana, noted that there’s nothing legal about these theories.

“You can't just make up law. Law is what it is,” Taylor said. “You can't just say, ‘And we're going to have a grand jury on my block.’ It doesn't work that way.”