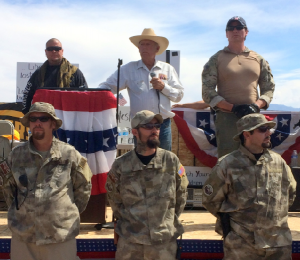 The right-wing media tried to sell Americans on the idea that the antigovernment “Patriots” and militiamen who gathered to block the roundup of Cliven Bundy’s illegally grazing cattle in Nevada were well-meaning lovers of liberty. However, Bundy’s most ardent defenders have revealed themselves to be a volatile collection of hotheaded, paranoid men (and a few women) with big egos and even bigger guns.

The situation at the ranch, where armed militiamen and “Patriots” are camped out, has deteriorated so badly that competing factions apparently drew weapons on one another during heated arguments.

We wrote on Wednesday about how tensions flared when a paranoid rumor of an imminent drone strike on the encampment began circulating. The team that primarily circulated the drone-strike rumor – Stewart Rhodes’ Oath Keepers – also began advising people to pull out, which sparked the wrath of militiamen.

Those militiamen voted to oust the Oath Keepers, and a couple even spoke of shooting Rhodes and his men in the back, which they deemed the proper battlefield treatment of “deserters”.

Now Rhodes has replied to their accusations in a video in which he teamed up with fellow Oath Keepers Steve Homan, Robert Casillas and Brandon Ropolla (the latter of whom are also affiliated with Mike Vanderboegh’s so-called “III Percent” movement) to attack the “nutcases” that Rhodes said have assumed control of the militia camp at the Bundy Ranch.

Rhodes painted an unflattering portrait of volatile “crazies” at the camp. Most strikingly, Rhodes described some of the threats of violence that have bubbled up to the surface at the camp:

RHODES: Now, when [John] Bidler was dropped on his butt-- John Bidler-- another guy -- some Mountain Man militia guy, put his hand on his gun and said, "I dare ya to draw -- draw motherf-----, I'm gonna kill ya." I'm sorry to cuss but that's what he said.  So they were being threatened.  Guys with hands on their guns threatening them.  That's why we told them to get out of there.  We knew the situation was this close from being a gunfight, right there inside the camp.

RHODES:  And this is the tip of the iceberg of the cluster out there.  One of our guys from Montana, Rick Delap, who was there from the beginning -- he's been out there for two weeks in the dirt – the day of this confrontation, I come to find out he had to draw on somebody.  Two of the Mountain Men guys came up to him -- were aggressing on him. Then one of them ran back to his vehicle and grabbed an AR and came back with an AR in his hand and Rick had to draw on him. And those two ran off.  That was this close from Rick having to shoot that ding-a-ling.  If that guy had raised his barrel, Rick would have had no choice but to shoot him.

TeamSarah4Choice at Daily Kos has been closely monitoring the videos emerging from the scene in Nevada and promptly posted the video with transcripts. As she points out, there was actual violence at the camp when angry young men knocked two elderly veterans, including Steve Homan, to the ground. Homan described it:

HOMAN: Well, like I said, there was quite a few people comin’ in to CP [the “command post”] in order to get more information – ‘cuz we were trying to get ‘em out.  A couple of trucks drove into the yard, and  guys started jumping out, and I could see right away when they were getting out of the truck they were very agitated.  We had one of the men run out toward our car.  I was standing in front of one of our cars. John Bidler, the Connecticut [Oath Keepers] president, was standing over by the driver's door. The gentleman came and he, uh, all of a sudden the gentleman started running toward me and hit me right in the chest with his forearm and, uh, put me down.

RHODES: That was Jack, that's one of Jerry DeLamus' guys from New Hampshire. That's who did that.  Dropped you in the dirt right?

HOMAN: He dropped me down and he immediately went to John Bidler and, uh, basically done the same. He just physically threw him to the ground.

We saw the same kind of macho radicalism during the April 12 confrontation with Bureau of Land Management and other law-enforcement officers – though it was somewhat obscured from public view.

A remarkable retrospective piece on the standoff from Las Vegas TV news station KLAS laid this reality bare. It revealed that the situation came within a hair’s breadth of becoming an all-out gun battle which the gathered “Patriots” defending Bundy seemed determined – indeed, outright eager – to have.

When Las Vegas police officers – several of them African-American – were called in to help bolster the outmanned local law enforcement ranks at the scene, those on the other side were anything but civilized:

OFFICER TOM JENKINS: We were told, we're going to go down there and we're going to get between the BLM and the protesters. We were going, okay, we've been there before, but as we were driving up, it was like a movie set. It didn't look real; people in the back of pickup trucks with rifles and shotguns. It was hard to grasp that at the beginning.

The report notes that the 30 or so Metro officers were placed between an estimated 400 militiamen bristling with weaponry and the fearful BLM workers whose job was gathering cattle. The crowd became nasty and began hurling taunts and insults of many stripes:

JENKINS: They had no respect for authority. Everything that you can think of to call a human being, animals, everything.

Jenkins said one of the protesters asked him if he was ready to die: "I don't know his name. He was wearing a Pittsburgh Steelers jersey. I'll never forget that," he said.

Another KLAS report noted that some of the militiamen who pointed weapons at federal agents during the April 12 clash may find themselves in legal hot water now. Clark County Assistant Sheriff Joe Lombardo confirmed that officers gathered intelligence on the people who brandished guns at the scene, and said that people who aimed their guns at officers would be dealt with.

"Yes, there will be consequences, definitely. That is unacceptable behavior. If we let it go, it will continue into the future," Lombardo said.

While KLAS reporters were gathering information for that story, however, their vehicles were vandalized by militiamen at the scene: “Pistol-packing militia men have blocked 8 News NOW's access to public roads,” the story reported. “Some poured lighter fluid around our news vehicle while others got physical.”