Brad Rogers, the sheriff of Indiana’s Elkhart County, is a lot like other self-described “constitutional sheriffs.” They are convinced that their extremist interpretation of the Constitution – which originated with the far-right, anti-Semitic Posse Comitatus movement – is the only valid one.

He has traveled far and wide to spread the message, too, including an appearance on CNN with Anderson Cooper last year during the debate over gun control. More recently, he traveled to Nevada to take part in the standoff between antigovernment “Patriots” and federal agents over Bunkerville rancher Cliven Bundy’s illegally grazing cattle. He held forth in a lengthy speech at the ranch on the role of the sheriff as the supreme law of the land.

But back home in Elkhart, he is taking heat for his Nevada adventure. The local Goshen News editorialized that “Rogers made a questionable decision at best to visit Bundy’s ranch and interject Elkhart County into this fray by wearing his sheriff’s uniform.” Many of his constituents were also less than impressed. The Nevada junket – at which Rogers wore his Indiana sheriff’s uniform – angered many of them, and they lit up social media with calls for him to step down or be recalled. 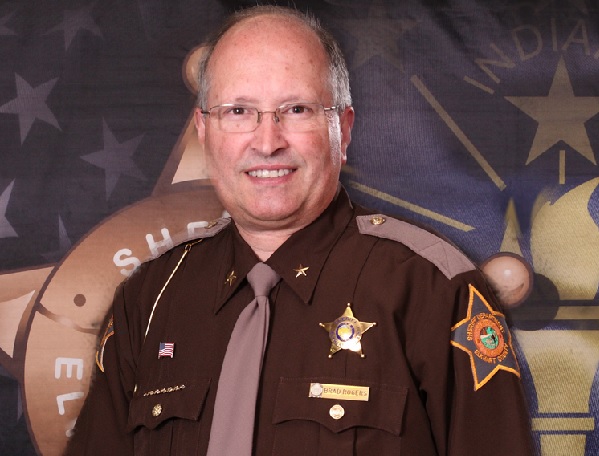 "Sheriff Rogers needs to stay in Elkhart County and worry about its problems instead of traveling across country to stick his nose into another states [sic] business where he doesn't belong. I have had about enough of this individual who thinks he is above the laws that he has sworn to defend. Your responsibilities are to the people of Elkhart County, not in Nevada," wrote one of them on the Elkhart Truth website.

“He should be fired by the commissioners!!” wrote another. “Or impeached. He was not elected to represent us in different state [sic] based on his crazy views. This is going too far! Scary!"

But others were wildly enthusiastic about his trip. One woman responded to his Facebook post to say: "Brad Rogers for president! Preach it brother! Truth is truth! We could use a little of that in this society..ppl pointing fingers, blaming others, excuses..sick of it.. we need leaders who understand what's right, moral, and just simply true!"

Rogers went to Nevada at the invitation – and with the sponsorship – of the Oath Keepers, the conspiracy-minded “Patriot” organization dedicated to recruiting law enforcement officers, and was introduced onstage by Stewart Rhodes, the Oath Keepers’ founder and president. Rogers’ speech was aimed at encouraging other sheriffs to follow his example.

“I'm not here to judge Mr. Bundy,” he said. “But even if he was wrong, 200 armed federal agents to gather up cows? It should be the sheriff intervening so that we don't have a Waco or a Ruby Ridge all over again.”

He claimed, again, that the sheriff is the supreme law of the land by noting their status as the highest-ranking elected law enforcement officials. Sheriffs, he said, are more connected to their communities because "we have a name, we have a face... You have a number for the sheriff. Who do you contact with the feds? There's no number. There's no face to them.”

He lauded the crowd: "Basically it's a bunch of peace-loving patriots like yourselves that are looking to have constitutional government and to not abide by any orders that are unconstitutional, like herding people into concentration camps or disarming the public or whatever the case may be," he said.

On his Facebook page, Rogers again lauded his fellow “Patriots”:

Then, what about those honorable Oathkeepers, patriots, 3 Percenters, and others who believe this event is a watershed moment for our nation?  I met and visited with these men and women, coming from all walks of life, all races, and different religions.  Some of these patriots quit their job and came to Nevada to keep their oath; to defend their nation against tyranny.  Some are expecting to die here.  Nevada U.S. Senator Harry Reid called them "domestic terrorists".  Reid's comments were inflammatory and irresponsible, and did nothing to quell the potential for violence.  The patriots are men and women who have come to the Bundy ranch to protect the Bundy's from a Federal government that has no logical reason to use force.  These patriots are not domestic terrorists. I would not stand with terrorists.  I'm convinced that the patriots will not fire the first shot.  But, if and when the BLM agents return and start firing, the bloodshed will begin.  It will be the battle of Bunkerville.

Back in Elkhart, Rogers was adamant in defending his trip, claiming it was all done on his vacation time and on the Oath Keepers’ dime.

"I'm the sheriff of this county whether on vacation or not," he wrote to the editors of the Elkhart Truth. "I was proudly representing Elkhart County to show that the people in Elkhart County are a peaceful people and, as sheriff, I desire for all potentially violent situations to be resolved without anyone getting killed."

Rogers’ previous brief appearance in the national limelight came in January of last year, when he was invited to participate in a “town hall” panel on CNN hosted by Anderson Cooper titled “Guns Under Fire,” a discussion of the efforts at the time to revive federal gun control laws.

Rogers had previously declared that he would enforce no such laws, so Cooper asked him about that:

COOPER: All right. I want to bring in Sheriff Brad Rogers who's also joining us here. Sheriff is on the other side. He's from Elkhart County, Indiana.

You made headlines recently when you said, you know, that folks in your area were concerned about people -- government coming and confiscating their guns and that you would not uphold any law that you felt was unconstitutional that was passed.

ROGERS: No, I do not believe so. Article 1, Section 8 of the Constitution clearly spells out what the federal government should be -- is authorized to do. And everything else goes back to the state. It's reserved for the states to mandate that.

In Indiana where I'm from, the Indiana Constitution spells it out even further. In Article 1, Section 32, it says, that people shall have a right to arm themselves to defend themselves and the state. So, you know, even if this -- you know, even if it's taken up by the state, they are restricted usually by their own constitution.

We know that from the Supreme Court. But can they ban assault weapons? Can they ban tanks? Can they ban stinger missiles? You bet they can. And they do, and so that much we know is that the federal government can ban certain weapons, but they can't ban all weapons.

The national smackdown does not appear to have altered Rogers’ views, however.