At first, the Bureau of Land Management (BLM) livestock wrangler driving on Tuesday along Interstate 15 in Utah, about 260 miles from the scene of the Bundy Ranch standoff in Nevada, thought he was experiencing fairly standard road rage. But then it quickly escalated into a freeway stalking with masks and guns, and ended with a law enforcement manhunt.

According to the Salt Lake Tribune, the wrangler was pulling a load of burros and horses northbound on the freeway when a dark blue extended-cab Dodge pickup pulled up alongside him and a man gestured at him with a one-fingered salute. The wrangler eased up and let the men drive past him, then he continued on. Just after passing the town of Nephi, the men caught up to him again. 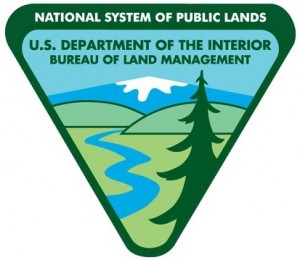 This time, they were wearing hoods. And they showed him a sign that read: “You Need to Die.” Then one of them pointed what appeared to be a Glock handgun at the wrangler.

As the wrangler again dropped back, he tried to get a license plate number. But it had been covered with duct tape.

The wrangler notified state police in Nephi, and they immediately began a manhunt for the men in the pickup. So far, that search has not produced any results.

In response, Utah BLM employees began removing the agency’s decals from their vehicles as a “precaution,” according to Eric Reid, the wrangler’s supervisor at the BLM field office in Fillmore. “We’re toning things down.”

Reid told the Tribune that he didn’t believe the men issued threats because of the agency’s wild horse roundup program, but rather were motivated by antigovernment animus, such as that still festering 260 miles down the desert highway in Nevada. Reid thought the men just wanted to harass a federal employee.

"It’s one of those things now we’re going to be dealing with," Reid said. "A lot of [people] have taken that attitude toward the government."

Officials at the BLM’s West District, according to a report from KUTV, sent out a memo urging employees to "be prepared to encounter unfriendlies."

"We never know in life when we will cross paths with these types,” the message states. “We are hopeful this will be a lone instance and it will fade from memory."

The state BLM office issued a firm statement through spokesperson Megan Crandall: "Threats against Bureau of Land Management employees will not be tolerated, and we are pursuing this matter with local law enforcement.”