The neo-Confederate League of the South (LOS) gathered outside the Southern Poverty Law Center in Montgomery today to protest same-sex marriage today, a departure from the group’s racist activism surrounding Southern heritage.

At the heart of the protest was an SPLC lawsuit, filed in the U.S. District Court for the Middle District of Alabama, which seeks to overturn the state’s 1998 Marriage Protection Act, which bans the recognition of same-sex marriages from other states. The suit also seeks to overturn the 2005 Sanctity of Marriage Amendment, which enshrined the ban.

The League, a neo-Confederate hate group that advocates for a second Southern secession and a society dominated by “European Americans,” seemed to use the protest to branch out into more mainstream conservative issues. 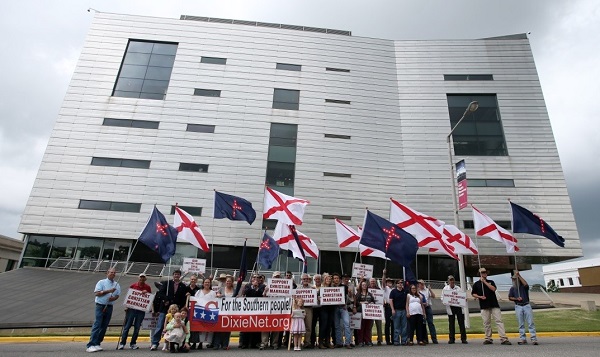 League of the South protesting in front of SPLC

“We’re protesting the Southern Poverty Law Center’s stand against the state of Alabama and its position on homosexual marriage,” Dr. Michael Hill, president of the League, told Hatewatch. “We’re here as much to support the concept of Christian marriage and the family as we are to protest anything.”

And so they protested, not with screams and chants, but with a dull murmur.

League members held signs that said “God Sanctions Marriage. SPLC Should Not,” and “Support Christian Marriage,” along with Alabama state flags and Christian Confederate flags. They milled about, quietly, caught up with friends and talked about ideas such as what the South would use as its currency when it does secede. This protest was lackluster compared to previous gatherings, and not as comical.

In 2004, about 50 demonstrators in town for a national League meeting brandished Confederate and southern state flags outside the SPLC. On a street corner, League supporters placed a pink toilet with an adjacent sign read, “Flush the SPLC.” There were none of those antics today, not even from the younger leaders who have argued that street protests like the one today are the future of the movement.

Brad Griffin, a League member and editor of the Occidental Dissent blog, who writes under the nom de plume “Hunter Wallace,” has been instrumental in shifting the LOS toward more frequent protests. In a piece titled “The Logic of Street Demonstrations” published last month to Occidental Dissent blog, Griffin expounded on the need to use public protests to address the “taboo” of being pro-white, pro-South and pro Christian. 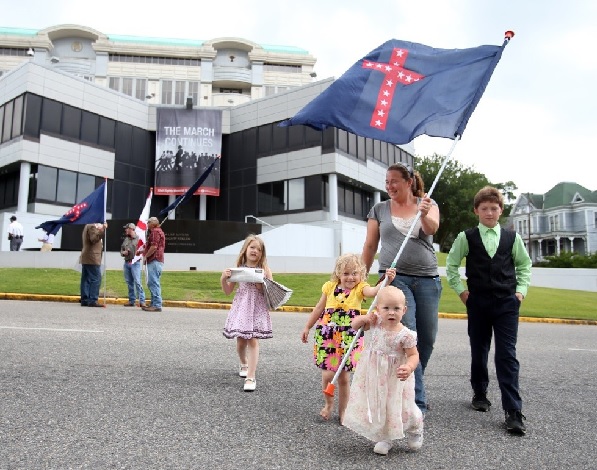 The scene in front of the Civil Rights Memorial Center

“By taking to the streets on a regular basis, we are demonstrating that we are no longer going to observe these taboos or acknowledge their legitimacy in the South. We believe our cause is moral and just, that our demographic displacement is an immoral assault on the birthright of future generations, and we invite our fellow Southerners to publicly violate the reigning taboos and join our movement,” Griffin wrote.

But even in the former cradle of the Confederacy, the public involvement with the League was lacking. The only engagement came from a group of young girls, standing in front of the Civil Rights Memorial, singing negro spirituals. And just as they had been all morning, the proud and graying League protestors were silent in response.