There’s a war brewing in the West.

What started with a standoff between federal officers from the Bureau of Land Management (BLM) and armed militias standing with a rancher in Nevada has now spread to Utah, where antigovernment activists, riding a wave of populist anger, are fighting restrictions on the use of federal lands.

Proposed in February, months before Cliven Bundy and his illegally grazing cattle became a touchstone for antigovernment activists, San Juan County, Utah, Commissioner Phil Lyman conceived a peaceful protest against a federal ban on the use of motorized vehicles in Recapture Canyon. And this weekend, angry protestors waved Gadsden and American flags as they rode their ATVs to protest the ban, which was implemented to protect archaeological sites in the canyon from damage. 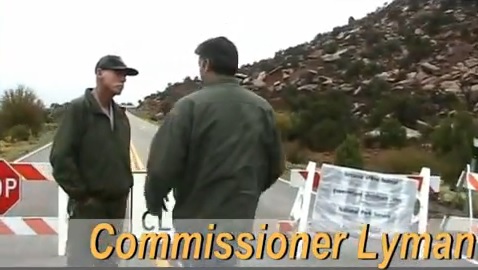 Phil Lyman speaking with park ranger ahead of protest (YouTube)

While speaking to Hatewatch, Lyman attempted to distance himself from the antigovernment vitriol that has drawn militias and antigovernment “Patriots” in droves to stand with the Bundy family in Nevada, while also sharing a stark assessment of the political climate in the West that has led to such antigovernment rage.

“If things don’t change, it’s not long before shots will be fired,” Lyman said, joining other conservative lawmakers such as U.S. Rep. Jason Chaffetz (R-Utah) who have warned of violence if the federal government doesn’t reign in the BLM. “We’ve seen it happen in history over and over and over. I think we can avoid it. But it’s not going to be by the people changing their attitudes and accepting more intrusion into their lives. It’s going to be by the federal government acknowledging people’s freedom.”

The pushback has been coming for years in states like Utah and Nevada, where the federal government owns the majority of the land.

In 2011, the Intelligence Report outlined growing Patriot anger in Colorado over efforts to restrict 2.5 million acres of the San Juan National Forest. At the time, it was a relatively isolated sentiment. But in the years since, the federal government has found angry Patriots ready for a confrontation throughout the West, especially since Bundy’s standoff.

What is happening is, in many ways, a reprise of other Western land-use uprisings of the past 40 years, including the "Sagebrush Rebellion" and the "Wise Use" and "County Supremacy" movements. As Lyman said, “It’s symptomatic of the feeling that people have in the West about the way the Bureau of Land Management is changing policies year to year that push them more into the corner that they have to make a decision like this.”

But in a more immediate way, it is a part of the second wave of the antigovernment “Patriot” movement that roiled America and spawned much violence in the 1990s. It’s no surprise that many of the armed militia members who stood with Bundy against BLM agents –– an event that has come to be known as “The Battle of Bunkerville” –– came to Utah to ride ATVs alongside local residents. Ryan and Aamon Bundy, two of Cliven Bundy’s sons, and Ryan Payne, who leads Operation Mutual Aid, a coalition of militias sworn to stand with citizens in confrontations with the federal government, were present in Utah.

Payne told Hatewatch that these protests would continue until the federal government understood its constitutional obligations to the people. “One of the biggest things is just standing with people to empower them so they feel comfortable taking a stand,” said Payne, who spent weeks on the Bundy ranch in Nevada. “The effect that these things are having on people is devastating.”

The BLM did not immediately respond to requests for comment on Monday. But the National Review reported that prior to the protest, the BLM had met with the FBI, the Utah attorney general and other law enforcement including San Juan County Sheriff Rick Eldredge. Together, the decision was made to “stand back” and avoid confrontation.

“It was decided that, at the end of the day, it is not worth it to spill any blood,” Eldredge said.