Judith Reisman is not well-known outside the anti-LGBT echo chamber, but she should be. Over the course of her three-decade career as a sought-after conservative talking head, lecturer and writer she has managed to paint herself as an “expert” in sexuality, gender, pornography and child sexual abuse. She is also listed as a “visiting professor of law” at the right-wing Liberty University and has appeared as an “expert” on congressional panels and court cases over the years. That’s no small feat for someone with a Ph.D. in communications and no formal training, education or credentials in law or psychology.

Now the friendly, grandmotherly Reisman is being tapped to serve as an “expert witness” in Jamaica in a court case that was filed last year challenging the constitutionality of the country’s 1864 anti-sodomy statute. Jamaica has a long history of homophobia, and its anti-LGBT policies have created a climate of violence and fear. 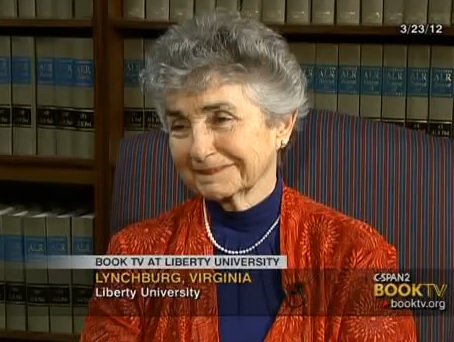 Judith Reisman promoting her book in 2012

The judge in the case authorized a number of religious groups and a child advocacy group to join the case as interested parties. One of those groups, the virulently anti-LGBT Jamaica Coalition for a Healthy Society (JCHS), has submitted an affidavit (PDF) to the court to grant Reisman expert witness status.

Now they’re trying to bring Reisman into the fold, citing her background in the “fields of Science Fraud, Human Sexuality, Child Sexual Abuse, and Mass Media Effects.” However, Reisman has no formal training, background or credentials in these fields, with the exception of “mass media.” She wrote her dissertation, for her Ph.D. in communications, on pioneering TV anchorwoman Dorothy Fuldheim. Nonetheless, she’s made a career out of promoting sexual pseudoscience and conspiracy theories about the work and life of prominent sex researcher Alfred Kinsey.

If you have heard of Reisman, it’s probably due to her unrelenting pseudoscientific campaign against Kinsey and the Kinsey Institute. In Reisman’s mind, Kinsey is the cause of all things wrong in the world, including pornography and sexual assault. Her latest work, Sexual Sabotage, which was published in 2010 by the far-right conspiracist WND Books, calls Kinsey a “traitor” to America because in Reisman’s mind, he and his researchers deliberately set out to defame the Greatest Generation and destroy the world. She has repeatedly claimed that Kinsey was a pedophile (there is no evidence to support her contentions), and went so far as to sue the Kinsey Institute for defamation in 1991 when they responded to her wild claims. The suit was dismissed with prejudice in 1994, a year after her conservative lawyer left the case. Even Kinsey’s death is a conspiracy, in her mind. Reisman claims that he died of “brutal, repetitive self-abuse” (i.e. masturbation) when in fact he died of heart problems and pneumonia.

Some of her other theories are equally dubious. She claims that pornography and homosexuality are imbued with what she calls “erototoxins,” or mind-altering chemicals. In her world, pornography literally rewires the brain and makes it susceptible to things like homosexuality.

Little wonder, then, that Reisman is also a staunch crusader against homosexuality, which she often falsely links to pedophilia. She is a supporter of the thoroughly discredited Holocaust revisionist work of notorious anti-LGBT hate group leader Scott Lively, who spuriously claims that gay men ran the Nazi Party and are thus responsible for the Holocaust.

Reisman kicked off her career in 1984 when she was awarded a huge grant – just over $700,000 – from the Reagan administration’s conservative Department of Justice to study thirty years of American pornography for evidence of child sexual assault.

Controversy followed, whether it was about the amount she was awarded, the process by which she got the money (awarded by right-wing publisher Alfred Regnery) or other matters. A December, 1984 article in the American University student paper (where Reisman was based at the time) noted that she appeared to have misrepresented herself on her résumé as the author of a book when in fact she was not. Reisman claimed it was a “secretarial error and poor proofreading”. Regardless, the study went on, and when it was completed in 1986, it was panned as unscientific. American University refused to publish it. Loretta Haroian (now deceased), an actual expert on childhood and sexuality, called the report “vigilantism: paranoid, pseudoscientific hyperbole with a thinly veiled, hidden agenda.”

That didn’t stop Reisman, however. She published the study in 1989 through her own Institute of Media Education (an on-and-off think tank), of which she was the president.

She’s been publishing ever since in the right-wing echo chamber. Her articles and commentary appear with frequency in conservative and hard-right publications like WND, RenewAmerica and Human Events. She also authored an article in the The New American, the magazine of the conspiracy-mongering John Birch Society, founded originally to battle the evils of Communism (ironically, Reisman’s parents were both members of the American Communist Party).

It’s no surprise that Reisman would be held up by the far right as an “expert” in fields in which she has no standing or expertise. She provides an academic veneer and confirms their prejudices without letting facts get in the way. But the tragedy is that her harmful and outrageous views, and those of her allies, are being wielded as weapons by U.S.-based anti-LGBT groups that, having lost the battle at home, are exporting homophobia abroad. Without a doubt, people will suffer as a result of Reisman’s “expertise.”