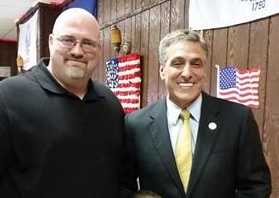 Even though his fellow Republicans originally denounced him, Steve Smith has been unrepentant and unapologetic about his racial views in the two years since he was elected to a Republican county committee in Pennsylvania. Nowadays, some of those Republicans even pose for photos with him at fundraisers. [Updated with statements from Rep. Lou Barletta and Matthew Dietz below.]

Smith, a former skinhead with a violent criminal record and past associations with neo-Nazi and white supremacist organizations, was elected in May 2012 to a four-year term to the Luzerne County, Pa., Republican Party county committee, on what appears to have been a single write-in vote – his own. Republican officials initially attempted to have Smith removed from the position, but eventually gave up and let Smith remain.

Smith recently posted a note at Stormfront – the white supremacist website whose users are responsible for nearly one hundred murders – observing that he had been in office for two years and was becoming entrenched in his role. “Not only were they not successful in ousting me, I was appointed as an officer in my district in my first year!” he boasted.

In the ensuing thread, his fellow white supremacists praised him for his “bravery.” Smith proclaimed: “I consistently vocalize my pro-White viewpoints at meetings. I tell perspective [sic] Congressional candidates that stopping the illegal alien invasion should be their top issue if they truly care about the future of this country.”

One of the participants in the thread asked: “I'm curious. Do you bring along the increase in crime statistics with you when you are arguing these points? If so, how do they handle it?”

Smith answered: “These politicians know I am telling the truth. They have never even tried to debate me on these facts.”

“Unfortunately, these politicians fear being called a "racist" more than they fear the violent crime that blacks and non-white Hispanics are bringing into their neighborhoods,” he added.

This note was similar to a letter to the editor of a local newspaper, the Wilkes-Barre Times Leader, that Smith wrote last year, defending and explaining his views:

I will bet that almost everyone will wholeheartedly agree with the first two facts without batting an eye, but the last fact seems to bring about false cries of “racism” and a litany of lame excuses.

How can it be perfectly OK to profile according to age and sex , but not race?

Has “political correctness” effectively stopped most people from publicly stating the obvious truth?

I stand behind my positions on racial issues because they are backed up with facts and logic. Here is a bet for the liberals and cultural Marxists who like to try to denigrate me for bringing up the truth on race and crime. If blacks can bring down their violent crime rate in proportion with their population in this country, and Detroit becomes one of the safest cities in the United States while maintaining its majority black population, I will quit being an advocate for whites.

Of course, the crime statistics that Smith and his cohorts obsess about have been around a long time, and their crude and oversimplistic analysis of it has been long debunked. Crime correlates with poverty, and race has been shown to be a very poor predictor of criminal tendencies. Nonetheless, that hasn’t stopped white supremacists from continuing to parade such statistics as proof of a racial root to crime. 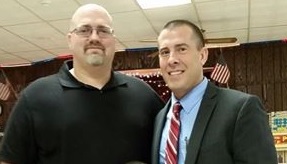 Smith has frequently denied that the ideology he advances falls into the category of “white supremacism” or racism. Yet Smith’s blunt approval of race-based smears meets the basic definition of hate – namely, having beliefs or practices that attack or malign an entire class of people, typically for their immutable characteristics (e.g. race).

Smith’s whole career at this point appears to be focused on advancing his racial views. When another user on Stormfront asked him about the possibility of someday running for governor in Pennsylvania, he responded: “I may move up the food chain, but if I do it will be a local office.” “I don't have the money or time to consider a run for Governor. I have two more years on my current term,” he said.

When he was first elected, Smith also adamantly denied that he was a white supremacist. "That's a bunch of name-calling the liberals do," Smith said. "I have made mistakes, and I am moving on."

Of course, Smith also dismissed his conviction for beating up a black man, during his days as a skinhead, with stones and chunks of pavement, claiming the account wasn’t true: "He wasn't even touched,” Smith said. He tried to pass the attack off as a case of "drunken stupidity."

Smith remains unremorseful and unrepentant. He boasted on Stormfront about the mainstream Republicans who posed for photos with him during a recent Republican fundraiser in his district. And he posted the photos.

We appreciate the Southern Poverty Law Center for bringing this to our attention.  The Congressman recently spoke at a local Republican event.  As often happens, he posed for pictures with a number of people when he was finished speaking.  Apparently, one of them was Mr. Smith, whom the Congressman does not know.

The Congressman rejects the opinions expressed on the website in question and does not associate himself with those views.  He is outraged that his image would be used in any way to support such ideas.

We’d like to thank the Southern Poverty Law Center for notifying us of Steve Smith’s assertions in an online posting following a Luzerne Co. Republican Committee event earlier this month. Mr. Dietz was very troubled to learn about Smith’s past and current associations; they stand in direct opposition to Mr. Dietz’s own beliefs – namely that this Nation’s greatness was indeed earned through the sacrifice of people from numerous creeds, races, and beliefs.

Matthew Dietz and his campaign have worked diligently to reach out to all families in the 17th Congressional District without exception or exclusion. We condemn any who would use his message to hurt, harm or alienate the citizens in our District, State, or Nation.