A reputed member of the Aryan Brotherhood was convicted today in Springfield, Mass., of the premeditated murders of three men whose bullet-riddled bodies were dismembered with a power saw in a failed attempt to conceal the crimes.

The murders were carried out in 2011 by David Chalue and co-defendant Adam Lee Hall, a member of the Hells Angels outlaw motorcycle gang, to silence witnesses the killers believed would testify against them in an earlier assault case, authorities say.

Chalue was convicted by a Hampden County Superior Court jury which spent all week deliberating before reaching its unanimous verdict following a three-week trial, the Springfield Republican reported. Chalue also was found guilty on three counts each of kidnapping and intimidation of a witness in connection with the killings. 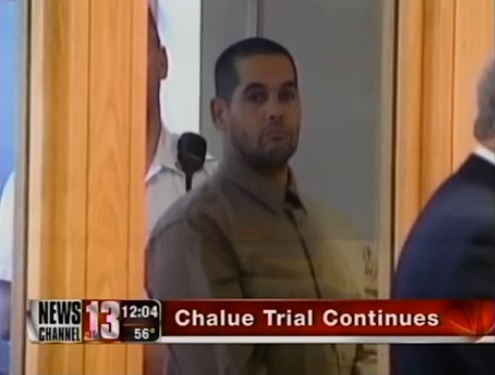 On Monday, Judge C. Jeffrey Kinder will sentence Chalue who faces a mandatory sentence of life in prison without the possibility of parole.

In an earlier, separate jury trial, Hall was found guilty of multiple crimes, including first-degree murder, and is now serving life without parole. A third defendant, Caius Veiovis, faces trial in September.

There was no physical evidence linking Chalue to the murders, various media outlets have reported.

The prosecution’s case against Chalue was built around the testimony of three jailhouse informants who cut deals for lighter sentences in exchange for their testimony. They testified last week, telling the jury that Chalue had boasted and provided details about his involvement in the murders of David Glasser, his roommate, Edward Frampton, and their friend Robert Chadwell.

Hall, 36, of Peru, Mass., Chalue, 46, of North Adams, Mass, and Veiovis, 32, of Pittsfield, were accused of kidnapping the three victims from Frampton's Pittsfield home in Pittsfield, Mass., sometime in the early hours of Aug. 28, 2011, and fatally shooting them, prosecutors told the jury.

The bodies, dismembered with an electric circular saw, were found 10 days later in Becket, Mass.

Prosecutors allege Hall wanted Glasser dead so he couldn’t testify against him in an unrelated assault case, and Frampton and Chadwell were killed to eliminate witnesses, according to media accounts.

Testifying for the prosecution, Jethro Kempton, a 33-year-old serving time for armed robbery, said he joined the Aryan Brotherhood five years ago while in the Massachusetts prison system. Kempton said before he met Chalue in person, he got a letter of introduction from him as a fellow Aryan Brotherhood member.

Next to Chalue's signature on the letter was a symbol of two lightning bolts which Kempton said is a symbol of the Third Reich and of the Aryan Brotherhood. The twin lightning logo also is often worn on Hells Angels’ leather vests.

In testimony, Kempton recalled asking Chalue about his affiliation with Hall, a “sergeant-at-arms” for a Hells Angels chapter. Kempton said Chalue’s response was Hall had access to firearms, which Chalue wanted, the newspaper reported.

“These were not just killers and not just cold bloodied murders, but depraved hateful acts…to satisfy some lust for retribution, intent to take apart their humanity piece by piece,” Capeless told the jury.

Defense attorney Donald Frank conceded to the jury that Chalue “wasn’t necessarily a nice guy,” but said the state did not show [he] was guilty beyond a reasonable doubt,” according to the TV station report s aid

“There was a basket of evidence to show that Mr. Chalue was an Aryan brother, but it doesn’t help you at all…determine whether Mr. Chalue participates in these murders,” Frank told the jury.