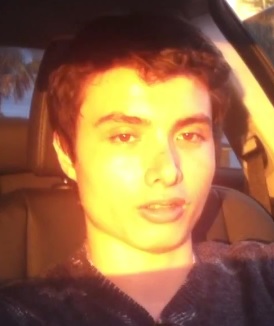 Elliot Rodger, son of “Hunger Games” assistant director Peter Rodger, reportedly carried out a series of drive-by shootings last night near the University of California, Santa Barbara campus to exact revenge for being rejected by women. Seven, including Rodger, were killed, and seven others were wounded.

Hours before the attack, Rodger recorded a chilling video message in his BMW, which he reportedly used to carry out the attack. In the recording, which he posted to YouTube under the title, “Elliot Rodger’s Retribution,” he announced his plan to exact “revenge on humanity” because girls rejected him in his life.

In a chilling and self-pitying monologue, Rodger explains that “for the last eight years of my life, ever since I hit puberty, I’ve been forced to endure an existence of loneliness, rejection and unfulfilled desires, all because girls have never been attracted to me.”

Then the video turns ominous: “You girls have never been attracted to me. I don’t you know why you girls aren’t attracted to me, but I will punish you for it.”

Rodger labels himself a “supreme gentleman” and “the perfect guy” and says that women’s lack of affection for him is “an injustice, a crime.” His emotional immaturity is staggering, and the video would be comic but for the tragic consequences.

As the video goes on, Rodger’s misogyny becomes more pronounced. He describes how he wants to go into the “hottest” sorority house on “the day of retribution” and “slaughter every single spoiled, stuck-up blonde s--- I see inside there.” “You will finally see that I am the true superior one, the true alpha male,” he says.

Rodger goes on to list the supposed crimes against him by women and his plan for retribution:

Girls, all I’ve ever wanted was to love you and to be loved by you, and wanted a girlfriend, and wanted sex, I wanted love, affection, adoration.

You think I’m unworthy of it, that’s a crime that can never be forgiven.

If I can’t have you, girls, I will destroy you. [laughs]

You denied me a happy life and in turn, I will deny all of you life, it’s only fair. I hate you, all of you.

Rodger was also a frequent contributor to an online message board known for its misogynistic content. We will be reporting more on his activities there shortly.