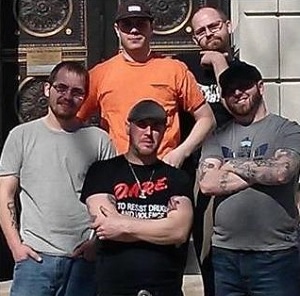 Vincent Pellegrino, bottom-left, posing with a KSS member and others (One People's Project)

An associate of the neo-Nazi Keystone State Skins (KSS) died last week in a car crash in Philadelphia after speeding away from the scene of a reported rape.

Vincent Pellegrino, 24, was identified by a 26-year-old woman who told police she was sexually assaulted around 1 a.m. on May 20 inside a 2004 Nissan Altima in the city’s Kensington neighborhood, the Philadelphia Daily News reported. She called 911 after escaping the vehicle which sped off.

Shortly after the reported rape, Pellegrino was reportedly driving the same vehicle at a high rate of speed when it hit a concrete wall on Westmoreland Street near the McKinley Playground.

Pellegrino, who was alone in the car, was declared dead at the scene 10 minutes later.

Pellegrino and his brother Nunzio Pellegrino “have been regular associates of KSS for an unknown length of time,” One People’s Project reported, citing online photos of the brothers standing with “well-known KSS members.”

The Keystone State Skins – KSS – was founded in 2001 and, for a time, was considered one of the most active white nationalist organizations in the United States. In 2009, the group changed its name to Keystone United, but is still frequently called KSS.

Last October, the neo-Nazi group sponsored its seventh annual rally in Philadelphia to celebrate Leif Erikson, the Nordic explorer who is believed to have been the first European to land in North America. It’s not known if the Pellegrino brothers were among those in attendance.

An estimated 40 racist skinheads showed up at the city’s Fairmount Park where they were met by about 100 anti-racist counter protesters.

Matt Heimbach, considered to be one of the leaders of a new generation of white nationalists and now affiliated with the Traditionalist Youth Network (TYN), spoke at the rally.