Alex Jones thinks the federal government is training military personnel to round up Americans and put them in concentration camps and could launch this dastardly plan at any moment.

Of course, he’s been saying that for a long time. It’s just that now, he says, they really are doing it. Really. 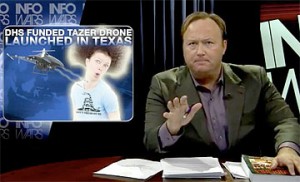 Almost since the very beginning of the “militia” movement in the 1990s, antigovernment “Patriot” movement followers have avidly subscribed to the theory that the United States government, under the grasp of the nefarious New World Order, was on the verge of swooping down on middle America with guns and SWAT teams, imposing martial law, rounding up conservative dissidents and gun owners, placing them in concentration camps, and imposing a dictatorship on the country.

Even back in the ‘90s, this conspiracy theory had been around for awhile, having first originated in the 1980s with the Posse Comitatus movement. And although no such plot or roundup has ever come to pass in the thirty years or so that the paranoia about it has been around, it has remained one of the most popular and enduring “Patriot” theories. Moreover, one of its most popular and steadfast progenitors has been Jones, the Texas-based radio talk show host, and his “Infowars” media organization. Jones has been spinning tales about FEMA concentration camps since the 1990s, and he continues doing so today, drawing in a large audience from the far left as well.

This spring, however, he has picked up the pace of his rhetoric about “martial law” and its imminent imposition on an unwitting American public. The impetus for their frenetic coverage was the construction of a “fake city” within an Army training center in Virginia, designed to give troops the chance to practice urban warfare in a realistic setting. Such urban-warfare centers are nothing new, and have been incorporated into military training for American soldiers, as well as others around the world, for many years.

The Army and its Asymmetric Warfare Group (AWG) proudly announced the opening of the new Virginia training center early this year, noting that among the features of the center are facilities that soldiers might encounter in an urban environment, including “a mosque, a soccer stadium, a subway station complete with subway cars and a train station with real rail cars.”

AWG Commander Col. John P. Petkosek said the center was designed to help identify shortfalls in its training for soldiers: "This is the place where we can be creative, where we can come up with solutions for problems that we don't even know we have yet," Petkosek said.

This was deemed threatening, however, by Jones and the Infowars crew, who began reporting in February, rather breathlessly, that the military was “training for martial law” at the facility.

“The public may not know the problem yet, because they [the government] haven’t yet executed the false flag event that they’ll use to openly activate martial law,” said reporter David Knight, “but the military has been creating scenarios where they can justify a move against small-town America for quite some time.” “And they’ve made it clear that their enemy is gun owners, veterans, those who want a small limited government, and Christians," he continued.

Infowars reporters took a brief tour of the facility and shot some video as well. Among the items that disturbed them was the appearance of what looks like a small Christian church, claiming that this was supposed to be the “mosque” that the Army had described. But in fact the mosque is a separate, much larger building at the center, and in fact only a few hundred yards away from the small church.

Infowars is also highlighting another such center, this time built for the U.S. Marine Corps at Camp Lejeune in North Carolina. This story prompted Jones to deliver one of his signature paranoid rants, in which he wrapped together a host of his favorite conspiracies into one grand scheme:

JONES: It’s sensational that we’ve gotten these secret Marine Corps documents confirmed, that they’re training to take on, basically, everybody’s granddaddy – anybody who’s independent and in a rural area. Globalists always, or any takeover group, takes over the cities first, then the suburbs, then the small towns, then the rural areas. Then they fan out to subdue and dominate. And the entire Pentagon program – the Emergency Centers Establishment Act, the Rural Affairs Commission that is under the Pentagon and Homeland Security – is putting plainclothes troops in every town and city, literally spying on people. And then bringing in the federal money to buy off the town leadership.

So this is the giant buildup for war with the American people.

This was followed by a long segment on Jones’ May 18 show in which Knight, as Jones’ guest, laid out more “groundbreaking” revelations about the Virginia center, the entirety of which turned out to be quotes from military strategists and psychologists about dealing with asymmetric warfare abroad. Jones and Knight promptly twisted the quotes around to make them appear to refer to actions against American citizens.

That's a pretty typical day at Infowars, where they're constantly on the lookout for new ways of stoking paranoia and feeding the conspiracy beast.