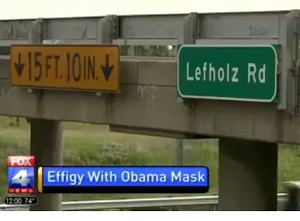 The overpass where the effigy was hanged

Some person or group in rural Missouri with an apparent hatred of President Obama managed to briefly shut down morning traffic on Interstate 70 on Monday by hanging an effigy of the president from an overpass.

According to local news reports, the effigy – a mannequin wearing a rubber Obama mask – was spotted hanging from an I-70 overpass on Lefholz Road, near Grain Valley in the rural outskirts of Kansas City, at about 5:30 a.m. Deputies responded to remove the display and found what they feared might be a bomb attached to it.

“The item that we had, we thought possibly could have been explosive, so we went ahead and shut down I-70 is both directions to ensure that if it was explosive there was nothing that was going to cause a hazard to any passerbys, and once we removed that from the scene we opened up I-70 almost immediately,” Sgt. Ronda Montgomery, spokesperson for the sheriff’s office, told reporters.

The item turned out not to be a bomb, and the interstate was reopened after a couple of hours. The sheriff’s office continued investigating the incident.

“We are talking with neighbors and canvassing the neighborhood,” Montgomery said. “We are putting the pieces of the puzzle together.”

Political science professor Max Skidmore of the University of Missouri-Kansas City told WDAF-TV that political dissent is protected by the First Amendment but this action may have crossed the line by threatening the president. “It’s some person who is simply vicious and whose hatred overwhelms what little good sense he or she may have,” he said.