Residents were asked to stay off the streets and to lock their doors as an intense search continued today for a heavily armed man suspected of killing three police officers and wounding two others in the far eastern Canadian city of Moncton yesterday evening. 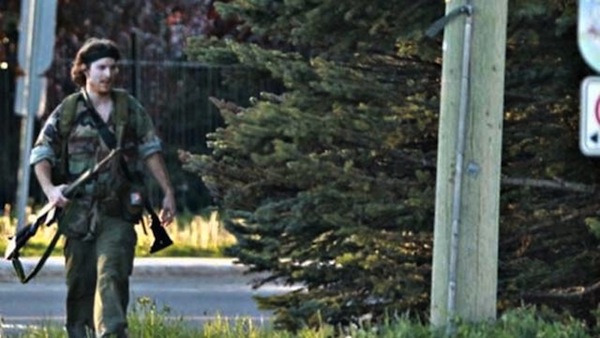 A motive for the shooting was not immediately known, but the 24-year-old suspect, Justin Bourque, apparently posted a series of anti-police and anti-gun control references on his Facebook page. There were also references on Bourque’s page to the widening gap between rich and poor and an anti-Semitic cartoon, depicting a hook-nosed Jacob Rothschild with beady eyes and huge teeth. 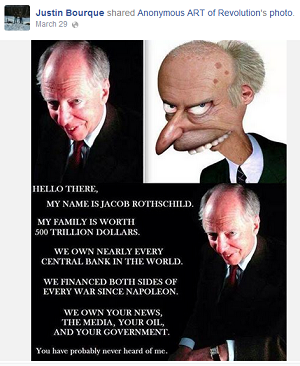 Bourque’s last post contained the lyrics of the Megadeath song, "Hook in Mouth," that read eerily like a suicide. It was posted shortly before the shooting.

“Ever think maybe it was meant to be this way?” the lyrics read near the end.

“Don’t try to fool us, we know the worst is yet to come.

“I believe my kingdom will come.”

One of Bourque’s Facebook friends replied as news of the shootings spread across the country: “You knew this wasn’t the answer.”

In a Facebook post dated March 26, Bourque shared a photo from the gun advocacy group Cold Dead Hands that depicted a mushroom cloud along with the words: “So you’re okay with the government having the weaponry to annihilate all life on earth…. But you’re upset I have a rifle that holds 30 rounds?”

“Share this with any gun grabber you know,” Bourque wrote. “Then to all of your friends who support the second amendment, so they can share it with all the gun grabbers they know.”

In another post, he shared a post from the Libertarian Party of Canada: “I SAW A MOVIE ONCE WHERE ONLY THE POLICE AND THE MILITARY HAD GUNS. IT WAS CALLED SCHINDLER’S LIST.”

In a photograph released by Canadian authorities that shows Bourque on the day of the shooting, he is dressed in green camouflage fatigues and carrying what appears to be a semi-automatic rifle in his right hand and another rifle slung over his shoulder.

That’s the scene police officers encountered when they responded to a call at 7:20 last night of a heavily armed man wandering through the north side of Moncton in New Brunswick, according to CBC News.

The gunman cut through Vanessa Bernatchez’s backyard as she watched the deadly scene unfold from an open window on a hot evening. She told CBC News that it looked like a police officer didn’t see the shooter until he opened fire.

As the search for Bourque stretched into the night and the next morning, schools were closed, public transportation was shut down and mail service in the area was cancelled.

Police released few details about Bourque, who was last seen in a wooded area near a subdivision.

“I lost three friends,” Damien Theriault, a spokesman for the Royal Canadian Mounted Police told CBC News. “And now we need to pull together and locate this individual as quickly as possible to ensure everyone’s safety.

“We are professionals,” he continued. “And we have a job to do right now. We will have time to grieve after.”