A man and a woman who neighbors say were militant white supremacists walked into a North Las Vegas mall pizza shop on Sunday and, shouting declarations about the “start of a revolution,” opened fire on two Metro police officers eating lunch there, killing both men. The two then walked into a neighboring Wal-Mart and ordered everyone out, though not before shooting one bystander to death. The two then shot themselves after exchanging gunfire with police inside the store.

According to the Las Vegas Review Journal, police found swastikas in the couple’s apartment, and the couple’s neighbors described them as “militant” people who talked about conspiracy theories, killing police officers, and “going underground”. 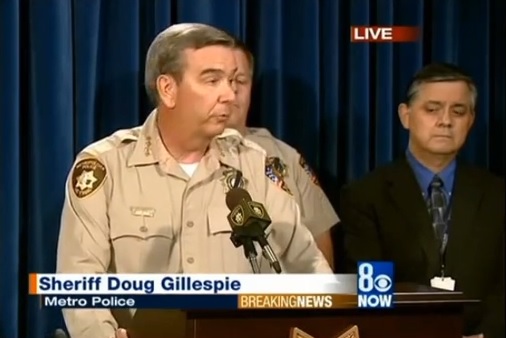 One of their neighbors said the man told him he had come out to Nevada to participate in the recent standoff with federal authorities over rancher Cliven Bundy’s cattle 80 miles northeast of Las Vegas. He also told the neighbor that he had been kicked off of Bundy’s ranch property, though Bundy’s wife said she was unaware of any such person having been on their ranch.

The neighbor described them as “weird people” and said he suspected they used methamphetamines.

Sunday’s nightmarish scene in Las Vegas erupted shortly before noon at the Cici’s Pizza restaurant near the Wal-Mart in North Las Vegas on Nellis Boulevard. The man, described as a tall, bald white man with a scruffy beard, and the woman walked in and opened fire. According to witnesses, before opening fire, they shouted that “this was the start of a revolution.” The woman reportedly walked up behind one of the officers and shot him in the head at the soft drink stand. They then took the officers’ guns and ammunition.

The Review Journal reported that they then draped a Gadsden Flag – the yellow “Don’t Tread on Me” banner long popular with antigovernment “Patriot” movement followers, and more recently adopted by the Tea Party – over the corpses of the two officers.

The slain officers were identified as Alyn Beck, 41, and Igor Soldo, 31.

The pair then emerged from the shop and headed toward the nearby Wal-Mart, telling other bystanders to “tell the cops it was a revolution.” Shortly after entering the Wal-Mart, the man fired his gun at the ceiling and began ordering everybody out, upon which a scene of mad panic ensued as people fled the store. At some point during this, one of them shot and killed a female customer at the store. Her identity has not yet been released.

Then the pair retreated to the rear of the store and, as police arrived, began exchanging gunfire with police. At some point, the couple proceeded with what police described as a “suicide pact”: The woman shot the man first, and then shot herself.

According to Clark County Sheriff Doug Gillespie, Beck leaves a wife and three children, while Soldo is survived by his wife and a baby.

“It’s a tragic day,” Gillespie said at a news conference at which he was visibly shaken. “We have lost two officers with young families.”

Gillespie said the reports of “revolution” talk were still unconfirmed, and added that his office was still working on uncovering a motive for the killings.