After a nearly four-month investigation, police in Dayton, Ohio have concluded that a white bus driver’s story – that he was shot in the chest by three black youths and that his life was saved because a slender religious tract in his shirt pocket stopped the bullets – was not a miracle but a lie.

“The whole thing was a hoax based on ugly racial stereotypes,” Mark Donaghy, executive director of the Greater Dayton Regional Transit Authority (RTA) told Hatewatch yesterday. “I don’t know if there’s anything that could make me more angry.”

Before police revealed the truth this week at a news conference and officially closed the case as “unfounded,” the story of Rickey Wagoner’s adventure in the pre-dawn darkness of Feb. 24 had flashed around the world. 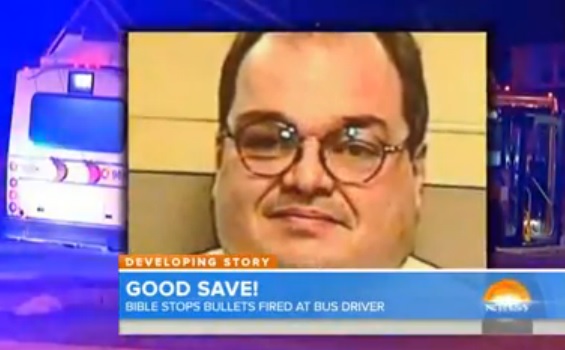 The story had everything: crime, race, a middle-aged, out-of-shape working stiff turned superhero and the word of God literally saving a man’s life.

But Dayton’s director and chief of police, Richard Biehl, told Hatewatch “the high probability and likelihood is that this was a staged event.”

“We don’t believe, certainly,” Biehl said, “based on our ballistics testing, there’s any way possible he could have been shot in the chest in this book and those bullets not go well through that book and into his torso.”

Wagoner told reporters he had no comment when they knocked on his door after the chief’s news conference.

As for a possible motive, the chief said he could only speculate since Wagoner had stopped talking to investigators early on in the case. Biehl said Wagoner owed more than $100,000 in back taxes on about a dozen pieces of property.

The union contract for RTA employees includes a felonious assault insurance policy for $100,000. “But the reality of the coverage is,” Donaghy said, “that a person pretty much has to die for their family to receive that kind of money.”

Crying Wolf: The Black Guy Did It

The chief said Wagoner refused to take a polygraph test but his “story remains unchanged.” That story is now just another sad example of the modern day version of crying wolf: the black guy did it.

Wagoner, 49, joins the likes of Charles Stuart, a white man in Massachusetts who killed his wife and blamed it on an imaginary African American man, and Susan Smith, a white South Carolina woman who wanted to start over with a new man, but not with her old kids, so she drowned her two small children in a lake, and said a black man had carjacked her with the children in the back seat, and Ashley Todd, a white Republican volunteer for John McCain’s 2008 presidential campaign who carved a backwards “B” in her forehead and blamed it on a black Barack Obama supporter (she used a mirror when carving the “B” and didn’t realize it would be backwards).

Of course, whites don’t have a monopoly on racial scapegoating. In the late 1980s, after an exhaustive and closely followed investigation, New York State authorities concluded that 15-year-old Tawana Brawley had lied when she said she had been raped by a group of white men, including a police officer and a county prosecutor.

But Wagoner’s story had something the other tall tales of crime and race did not – it had a miracle.

Wagoner told investigators, including an FBI agent brought in to investigate the case as a possible hate crime, that his electric-powered trolley bus broke down around 5:05 AM along a desolate stretch of his route on Feb. 24. The radio also wasn’t working, he said. He climbed off the bus to determine the problem and find a phone to call for help.

That’s when, according to his story, he was confronted by three black youths, dressed in hoodies and armed with a gun, a knife and apparently hearts filled with racial hatred.

Wagoner told investigators the attackers told him they were out to “shoot a polar bear” – street slang for a white person.

Then they shot him twice in the chest at point blank range.

What saved his life, Wagoner said, was “The Message,” a slender religious tract in his shirt pocket that stopped the bullets.

In an RTA incident report, Wagoner wrote a couple of weeks after the alleged attack that getting shot in the chest felt “felt like I got hit with a hammer.”

He said he grabbed the gun and pulled it towards his right. That’s when he said he was shot in the right thigh. Wagoner said he struggled with the gunman and the gun dropped to the ground. He said he started choking his attacker, who was on the ground gasping for air. Then one of the assailant’s partners stabbed Wagoner in the left arm. He wrestled the knife away and was kicked in the head.

“I started seeing stars,” he wrote in the report.

Then he picked up the gun. It was jammed. He cleared the jam and as the three youth fled into the darkness he fired at least one round at them.

He climbed back on the bus. It started right up and he drove off, looking for help.

That’s his story and he’s sticking to it.

None of It Works

Much of the event was captured on video and audio recordings from the bus. But the recordings never reveal images or voices of Wagoner’s alleged attackers.

“None of it works,” Chief Biehl told Hatewatch. “All of this activity then has to occur, him getting the weapon away from the suspect, disarming the other suspect of a knife, stabbing one of them, clearing the gun, shooting at them, then covering 200 to 300 feet back to the bus and do all of that in 22 seconds.

“And he gets back on the bus and he’s not out of breath. He’s able to call dispatch and he’s able to have a normal conversation. It’s just not possible.”

"The knife wounds are indicative of self-inflicted wounds, not defensive wounds," he said. "I'm not saying that he did it himself because I can't rule out the possibility that someone else cooperated with him in this event."

The department conducted extensive ballistics testing on the gun at the police academy on April 10. Investigators acquired eight copies of "The Message." The bus company supplied several uniform shirts similar to the one Wagoner wore that day. Over and over lab techs fired bullets from the .25-caliber semiautomatic pistol gun into the shirt, the book and a gel substance simulating the effect of bullets ripping into a human body. Each time the result was the same. There was no miracle. The bullets traveled 15 inches into the gel, according to the Dayton Daily News.

Biehl wanted Wagoner to be charged with filing a false report, a misdemeanor, but the city prosecutor declined.

Wagoner does, however, face possible termination of his job. A 10-year veteran of the RTA, he has been charged with dishonesty and behavior detrimental to the bus system. A disciplinary hearing could be held as early as next week.

“I can tell you, the first days after that incident,” Donaghy, the RTA executive director, said, “my voicemail was loaded with employees, black and white, wanting us to get out there, find these kids, and hang them.”

Then as more and more holes began appearing in Wagoner’s story – for example, engineers examined the bus and could find nothing wrong – the calls began to change.

“Within two weeks,” Donaghy said, “my voicemail was overloaded with the same people, saying, ‘Oh, my God, how could he have done this?’ Some of the white employees were concerned, he’s turned us into targets.”

Some of the most supportive calls for Wagoner in the days immediately following the phony attack were from senior black employees.

“Later they felt betrayed,” Donaghy said. “It was very hard on them.”

Donaghy said that at the time of the alleged attack the RTA had recently won a battle with a largely white suburban community that for years had blocked the expansion of bus service to the area. “That whole issue revolved around perceptions that only young black males will ride those buses and if you let service into your community” there will be trouble, Donaghy said.

“There are some ridiculous things that we fight here on a daily basis that are really just people perceptions,” he said. “That’s probably the big concern I had is that when a person uses that sort of a stereotype when we’ve already got perception problems, it fuels anger on all sides.”