Police and FBI agents in Indiana confirm they are now investigating a group tied to Samuel L. Bradbury, who was charged in federal court this week with making terrorist threats. He has boasted of an affiliation with Jerad and Amanda Millers, the couple who killed two Las Vegas police officers.

Bradbury is accused of making Facebook threats to kill police officers and judges involved with his 2011 marijuana possession arrest and to “blow the Tippecanoe County [Indiana] Courthouse to pieces.” Police found fire-bomb components and two devices during searches. 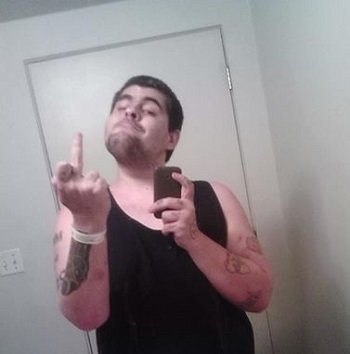 A photo Anthony Gonzales posted of himself on Facebook

Bradbury, 22, of Pine City, Ind., also claimed he and someone he identified only as “Ant” were part of a “cop-killing group” identified as the “765 Anarchists” – along with the Millers.

Investigators said earlier this week they “found no evidence” to support Bradbury’s Facebook claims that he ran a “cop killing” group called “765 Anarchists” or that there was any connection with the Millers.

However, an investigation by Hatewatch determined that Bradbury was part of a Facebook group called the “765 Movement,” with 97 members from the Lafayette area does exist. The group – named for the Indiana telephone area code – includes a link to an international anti-police social media group called “All Cops Are Bastards,” whose motto is “Fuck the System and Fuck the Police.”

Hatewatch also confirmed that the administrator of the “765 Movement” page on Facebook is Anthony DavidMichael Gonzales, 25, who uses the screen name  “Anthony MyFriends Gonzales.” He formed the Facebook group after the Millers were involved in the June 8 killing of two Las Vegas police officers and after Bradbury was arrested.

“I can confirm that Anthony DavidMichael Gonzales is the person identified as ‘Ant’ in the posting made by his friend, Samuel Bradbury,” Detective Sgt. Matt Coddington, of the West Lafayette Police Department, told Hatewatch today.

The police investigator responded a day after he was provided with information about Gonzales and the 765 group by Hatewatch.

It remains unclear whether the group existed outside Facebook and how many of the group’s 97 members actually shared the views expressed by Bradbury and Gonzales.

Gonzales has not been arrested nor charged with any crimes, Coddington said, “but he and the activities of the ‘765 group’ are under active investigation by us and the FBI.”

Gonzales did not respond to a request for an interview by Hatewatch.

On Monday, when his friend Bradbury was charged in federal court, Gonzales – who had made several other anti-police postings and has now removed many of them – said he was “madder than [serial killer] John Wayne Gacy inviting the cops over for dinner.”

Shortly after Bradbury was arrested by local police, there was this exchange on Gonzales’ Facebook page:

Anthony MyFriends Gonzales: my nigga sam bradbury he got picked up for tagging me in a status for killing cops in lafayette

Anthony MyFriends Gonzales: no he was just playing bro he was defending me for my whole ordeal with the cops he made that status bro i was tagged in saying he was head of the 765 anarchist cult saying he was gonna kill troy green and melt down the courthouse with thermite and melt cop cars with thermite he said he ran orders to jerad and amanda miller to kill those cops it was his swastika flag and ganzin flag he almost got me in trouble bro i told him to fucking take me off that status now i didnt know he was gonna say all that shit i thought he was gonna defend me by telling the cops to leave anthony gonzales the fuck alone no bro he made a fake sincere death threat to the wlpd and lpd and officer troy green and our courthouse

Bradbury’s attorney said his Facebook postings were a mere fantasy, an exercise in free speech.

There is one report, still unverified, Coddington said, that Bradbury was in a vehicle with the Millers during a traffic stop in Indiana, prior to Jerad Miller’s visit to the Bundy Ranch standoff and the Las Vegas shooting.

“It is my understanding that previously the FBI did check this group and didn’t not find it to be a threat or credible.” Coddington said. “That’s being re-examined now.”

Amanda Miller, who committed suicide in a Wal-Mart store after killing the Las Vegas officers with her husband, attended high school in Lafayette, apparently with some of those who are now members of the 765 Movement.

“Exactly what the connections are – that’s what we’re now investigating,” Coddington told Hatewatch when asked if members of the group were associates of either of the Millers.

Not unlike so-called sovereign citizens, Gonzales appears to espouse the belief that government should have no control over individuals, especially involving drug issues, and they voice vitriol at police.

“Yes, that is a fair comparison,” Coddington said when asked about the views expressed on the group’s page and the anti-police, antigovernment views of sovereign citizens. Such hatred of police “clearly presents an officer-safety issue,” just like that presented by sovereign citizens, he said.

Postings on Gonzales’ Facebook page are laced with racist language. One posting made reference to a black man who was arrested for the stabbings last month of two young white women. He wrote:

Another posting showed a photo of an unidentified man with a Nazi swastika on his forehead, à la Charles Manson.