What if militias announced a showdown with the feds and nobody came?

That’s pretty much what happened in Texas this week, after a handful of militia activists called on their fellow militia members to intervene in the increasingly fraught humanitarian crisis on the U.S.-Mexico border, involving large numbers of children from Central America who are straining the government’s ability to process their complicated cases.

For a Texas militiaman named Chris Davis, there was nothing complicated about it. In a video he posted at YouTube – which he has since been removed – he offered a simple solution for dealing with the young border crossers. 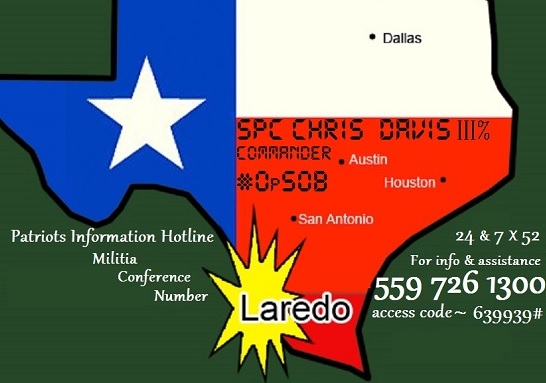 A graphic from the Operation Secure Our Border Facebook page

Davis’s solution was part of his call to his fellow militia members to make their way to the Texas border near Laredo in order to prevent child refugees from crossing there. Late last week, he posted an “Action Alert” bulletin at various online forums, including his Operation Secure Our Border Facebook page. “All Texas & National Militia Available Please Converge Immediately,” it said. The alert said the “mission” was to “close down Laredo Crossing for starters,” and that the operation would be “complete when border fence is in place and secure.”

It named a gathering point at a truck stop in Encinal, Texas, and concluded: “It's time to bring down the thunder. Activating the Patriots willing to stand up for America GO GO GO. … Let's share this like the brushfires of Liberty.”

However, Davis’ militia muster call quickly vanished into virtual thin air. Shortly after he began receiving media attention – including accounts in the  McAllenville Monitor, Brownsville Herald, San Antonio Express-News and Los Angeles Times – he not only took down all his YouTube videos and deleted his channel there, he also deleted his Facebook page and all its incendiary antigovernment content.

Davis told the Express-News that he removed the video Monday because it was taken out of context "by a newspaper that supports amnesty."

“We’re here to supplement and be where law enforcement is not and help them support the border,” Davis told Los Angeles Times. “There’s nothing malicious, there’s no malicious intent — every person is vetted. We’re just here to serve freedom, liberty and national sovereignty.”

Davis described himself as a 37-year-old truck driver, saying he had served in the Army and National Guard, and had been involved in Open Carry Texas events. He told reporters that the militia was in “preliminary stages of recruiting and training volunteers” and would be showing up in Laredo “in a few weeks.” He wouldn’t say how many were involved.

He and a spokeswoman from North Carolina named Denice Freeman tried to quickly reshape the image of their campaign.

“This is not a ‘go-in-guns-blazing’ kind of thing,” Freeman told the Brownsville Herald. “This will be handled with the utmost professionalism and security and safety for everyone involved.”

One of Davis’ Texas cohorts, a militiaman from Rocksprings named Rick Light, told the Los Angeles Times that he was surprised by the video.

“I’ve never known Chris Davis to threaten anyone like that,” Light said. “There’s a lot of hype and Commander Davis is kind of being targeted.”

Light insisted that they plan to be a “productive, professional militia that just assists our law enforcement.”

Within a few days, though, Davis had dropped out of view entirely. Scheduled to appear on a web talk show on the conspiracist Truth Broadcasting Network called Death to the New World Order, Davis simply didn’t show up. The host, Harry Link, told listeners that he called Davis himself and was told he simply couldn’t do the interview.

Link was furious, and spent the bulk of his remaining hour-plus of airtime ranting against Davis, claiming that the militia presence on the border not only was “fake” but actually comprised a New World Order “psyops” program designed to fool true Patriots like himself.

Davis identified himself to a couple of reporters as a “III Percenter,” one of several antigovernment Patriot movement organizations. However, Mike Vanderboegh, one of the originators of the “III Percent” concept and something of a self-anointed kingmaker in the militia movement, wrote a scathing post about Davis’ plans on the border, concluding: “Based on what I know now, stay as far away from this incipient exercise in cluster coitus as you can."

However, Davis was not the only right-wing extremist calling for militias to head for the Texas border. At the Free Republic – where one of the first “Operation Secure Our Border” bulletins was posted – publisher Jim Robinson posted his own call to action, this time for the California militias to get out there and help support the efforts in Texas.

“Ok, this is just the germination of the plan,” Robinson wrote. “We have independent units from the Bolinas Border Patrol and the Central Valley Citizens militia joining forces with independent citizens militia units of Texas to defend our southern border in Texas, to protest Obama's lawless open borders policies and to rally support for Governor Perry to officially call out Guard units and Texas militia units at his disposal to defend the border!! Lawsuits will not cut it. The invasion is happening now. Action must be taken NOW!!”

That plan seems to have drawn roughly the same response as Davis’ muster – namely, none at all.

Likewise, another Patriot-movement site called “Patriot Information Hotline”, operated by a woman named Barbie Rodgers, ran Davis’s original “Call to Action”, and then became a short-lived conduit for information about the Texas effort. She told an interviewer on Newsmax’s “MidPoint” show that this would be an ongoing effort: “This will continue for days and weeks to come” and spread “to other points” along the Mexico border, she said.

An Express-News reporter called Rodgers’ "Patriot Hotline" and was told that there were already "boots on the ground" in Laredo. The message at the hotline told callers to provide a name to perform a "criminal background check to make sure you don't have any felonies".

And then there was militia enthusiast Dyna DeRien, who posts at YouTube as 1HellOnHeels and calls herself the “CEO and founder” of “the American Anti-Federalist Patriot Party.” After Davis yanked all his videos from the Internet, hers were the only videos remaining on the web describing the militia plan of attack and the motivation for turning out on the border.

"We're tired of those SOBs in Washington D.C. bringing all these illegals into our country and just spreading 'em out with all their diseases all over the place," she said.

A day later, that rant had been taken down, too.