The Coeur d’Alene Tribe of American Indians — itself the target of a recent racist graffiti attack — has booked racist rocker Ted Nugent for a public concert next month at the tribe’s landmark North Idaho casino.

The decision is stirring controversy for a tribe that has proudly involved itself in human rights causes and contributed thousands of dollars to fight racism.

Nugent sometimes wears an Indian headdress on stage, coming close to ridiculing American Indian culture, and mocks those campaigning to change names of sports teams that use words like Redskins and Savages. 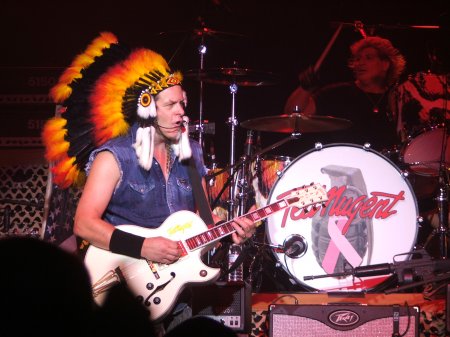 Ted Nugent in his headdress

The legendary rocker, who also is on the board of the National Rifle Association, has a “long history of racism, sexism, homophobia, Islamophobia, animus towards immigrants, and propensity to use violence-tinged language,” Media Matters reported earlier this year.

That came after Nugent called President Obama a “subhuman mongrel” and referred to him as a “chimpanzee.” Nugent previously called Obama a Nazi and a “piece of shit” who should “suck on my machine gun.” He once called Hilary Clinton a “toxic c---” and, on another topic, said, “I’m beginning to wonder if it would have been best [if] had the South won the Civil War.”

Many of Nugent's offensive comments have been made on stage during concerts, but he also
has made some of them as a contributor to World Net Daily, a right-wing publication known for pitching conspiracy theories, anti-gay propagandizing and challenging the authenticity of President Obama's birth certificate.

“That’s a good question,” Heather Keen, the public relations officer for the Coeur d’Alene Tribe said today when asked why the tribe had booked the controversial rocker for a casino rock show on Aug. 4. “I’m going to have to check and see what happened here. Obviously, something may have fallen through the cracks.”

She promised to get a statement from Chief Allen, the full name of the tribal chairman, and Don Matheson, the chief executive officer of the Coeur d’Alene Resort and Casino. It was not immediately clear who booked Nugent or if tribal leaders were aware of the singer’s racist track record.

A short time after being contacted by Hatewatch, Keen released this more formal statement: "The casino is a large enterprise that operates very autonomously and under that model, the casino management team is in charge of booking entertainment acts. Tribal Council doesn’t play a part in day to day operations of the casino and in fact Tribal Council wasn’t aware of this booking until it was brought to their attention this morning. Reviewing scheduled acts is not something in which Tribal Council or the tribal government participates; however, if it had been up to Tribal Council this act would have never been booked. We’re looking into our options right now but ultimately that will need to be coordinated with and through our management team at the Casino.  Having said that, I believe there are some high-level conversations taking place at the Casino as we speak."

“It’s surprising to me,” former tribal council member John Abraham, who also has served on the Kootenai County Human Rights Task Force, told Hatewatch. “I had no idea about this guy’s background and it’s really something.”

Christina Crawford, who worked for seven years as the tribe’s manager of entertainment and special events, said she was astounded when she was told Nugent would be appearing at the Coeur d’Alene Casino. Crawford was a founder of a human rights task force in Benewah County, where the casino is located.

“Never ever would I have booked that kind of racist at the casino,” Crawford told Hatewatch. “I find this astonishing.”

“The Coeur d’Alene Tribe has a long record of involvement in human rights issues and they understand clearly what harm prejudice can do. Maybe someone just booked him as a rock-and-roll act and paid no attention to his other issues.

“It’s so destructive for the tribe,” Crawford said.

Tony Stewart, a founder of the Kootenai County Human Rights Task Force, said he was dumbfounded about Nugent’s forthcoming appearance hosted by an American Indian tribe that fights racism.

“He’s a hate-filled speaker, is what he is,” Stewart said of Nugent.

The irony of the tribe's decision to book Nugent is highlighted by an incident that occurred earlier in July, when unknown vandals defaced a sign on its reservation with the words "White power" and "Die [expletive] Indians," along with what appeared to be a misdrawn swastika.