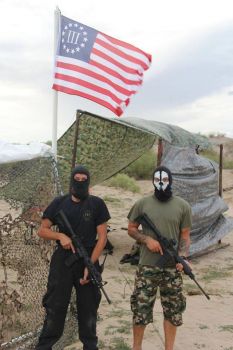 Promotional photo provided by Texas border militia to the Express-News

After stumbling out of the gate last month, militia activists in Texas are now appearing along the U.S.-Mexico border as part of a vigilante campaign to “secure our border” in the midst of a refugee crisis involving unaccompanied children from Central America.

According to a handful of news reports out of Texas, the militiamen – who initially were nowhere to be seen after publicizing their plans last month – are now conducting patrols in some areas in hopes of stopping incursions by border crossers.

The San Antonio Express-News published a report this week that listed some of the groups that have been involved in the patrols and included numerous photos of the militiamen.

Strikingly, the patrols are being organized secretively, and all the militiamen involved have insisted on anonymity.

The photos published with the report show dozens of men wearing camouflage gear and carrying a variety of semi-automatic weapons, patrolling areas of the border of southern Texas. In some cases, the men are wearing masks; in others, their faces have been blurred by photo retouching.

The individual who provided the photos insisted on blurring the visible faces of participants, saying they need anonymity to protect against retaliation by “cartel and gang members.” Nonetheless, some of the men in the photos contacted the paper and demanded that it remove the images, blurred or not, from the website.

Kolten Parker, the reporter who handled the story, told the SPLC that he and his editors tried to independently confirm as many details as possible, given that the militias have been secretive about who they are and when and where they are conducting patrols.

“We’ve spoken with ranchers in the area where these patrols are occurring, and we’ve seen plenty of evidence that they are,” Parker said. Judging from the 30 or so photos that the paper ran, he said that so far the patrols are being conducted in a well-organized manner.

Barbie Rogers of the Patriot Information Hotline told the paper that there are 10 “operations on the ground in Texas” this week.

When the militia patrols were first announced last month, the chief spokesman – a 37-year-old truck driver from Von Ormy named Chris Davis – stirred up concerns about potential violence by explaining, in a now-deleted video, how to solve the border problem: "How? You see an illegal. You point your gun dead at him, right between his eyes, and you say, 'Get back across the border or you will be shot.'"

Davis shortly disappeared from view, closing down his operation and refusing any further media interviews. It shortly emerged in the Express-News that Davis had been discharged from the Army in 2001 "under other than honorable conditions in lieu of trial by court-martial," according to a summary of his military service.

Another news report from Texas, from KBMT-TV in Beaumont, Texas, featured an "unorganized militia" in Southeast Texas. The group’s self-described “commander” is a middle-aged man named David Smith.

The news report buys into Smith’s claim that his militia bears no resemblance to militias in other countries and utterly ignores the long association of militias with radical antigovernment “Patriot” movement extremists.