Joe Arpaio, the controversial sheriff of Arizona’s Maricopa County, recently told a Tea Party gathering in California that he considered resorting to the “sovereign citizens” tactic of calling for a so-called “citizens grand jury” while he was conducting an investigation of the legitimacy of President Obama’s birth certificate. 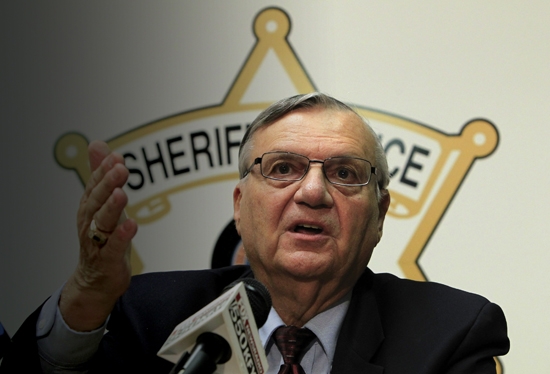 The subject came up during an Arpaio speech on July 27 to a gathering of Tea Party conservatives in Ramona, Calif. A video taken by an audience member shows Arpaio being questioned about calling for a “sovereign citizens” tactic to be applied in a Maricopa County “fraud” case that “involved not only the perpetrator, Obama, but the senators, and congressmen, and … your secretary of state. Why don’t you form a citizens grand jury to bring indictments against these people, and when you get no response from it, then you can form a citizens trial court -- ?”

The sheriff interrupted the man’s question.

ARPAIO: I heard about that. You know what I was looking at? It wasn’t for that. I was looking at it for the birth certificate. If I was gonna do a citizens grand jury, it would be because of that.

Now, don’t think I’m chicken. I can take on the president, I think I have a little …

The questioner interrupted Arpaio to inform him that he would move from California to Maricopa County free of charge just so he could head up such a grand jury.

“Citizens grand juries” are an integral part of the “common law court” system devised as part of the often convoluted and complex system of beliefs of the sovereign citizen movement, and references to them often appear when assorted antigovernment “Patriot” movement members (who are closely aligned with the sovereign citizen movement) are involved in legal actions, including criminal cases.

Arpaio grabbed headlines in 2011 when he went “birther” –– that is, he announced that not only did he subscribe to various conspiracy theories claiming that President Obama was not born in Hawaii and thus is not an American citizen, he intended to investigate the matter of the president’s birth certificate, and he announced in 2012 his investigators had determined that it was “definitely fraudulently.”

The investigation, crowd pleasing as it may have been for his arch-conservative audience, went nowhere –– although Arpaio did recently announce that he may have determined who the person was that forged the president’s birth certificate.