As the Minuteman Project attempts to restore its influence amid what some feel is a new crisis brewing on the border, the project’s co-founder Jim Gilchrist has been barnstorming media outlets in an effort seemingly aimed at saving a public image marred by criminality as he works to rebuild the project.

On VCY America’s “Crosstalk” show Tuesday, for example, Gilchrist felt free to tell his interviewer that hundreds of thousands of Central American children were going to form the “vanguard” of a “Trojan-horse invasion” of the United States, and even sympathized with a caller who suggested gassing the children to death at the border.

But the more difficult realities of the Minutemen came during an interview with Ed Berliner, host of Newsmax’s “MidPoint” program. Rather than serve up softball questions as one might expect from the frequently far-right media outlet, Berliner challenged Gilchrist about the original incarnation of the Minutemen, noting that the movement unraveled amid “criminal charges against some of the people involved, and that includes the former leader, Chris Simcox,” who now faces trial on three counts of child molestation.

Those “criminal charges” Berliner referenced also included the cold-blooded killing of a 9-year-old girl that landed one of Gilchrist’s onetime associates, a Washington state woman named Shawna Forde, on Arizona’s Death Row. A 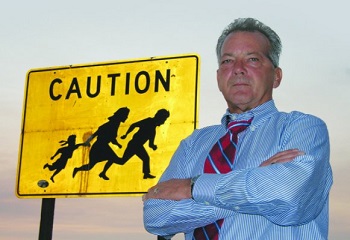 GILCHRIST: Yes, there have been a couple of incidents of some very serious embarrassment, uh –– this conduct was not committed by anyone within the Minuteman Project but in rogue groups that used the Minuteman movement as a veil, essentially, to carry out sinister and criminal activities.

But Berliner was persistent, asking Gilchrist to set the record straight regarding just how closely tied he was to those crimes.

GILCHRIST: No, no, they weren’t card-carrying members of the Minuteman Project. We don’t have card-carrying members. We have anyone who agrees that we should be a nation governed by laws, not mob rule, that mob being 30 million illegal aliens, is an honorary member of the Minuteman Project. That gives me 280 million members. Not all of them agree with me, but I look at the movement itself as having 280 million members out of the 310 million population, who want our immigration laws enforced.

It is at least nominally true that Gilchrist’s operation doesn’t have “members” per se, and by that definition, at least, Shawna Forde was not a member of the Minuteman Project. However, virtually everything else Gilchrist told Berliner was false.

Shawna Forde was an associate of Gilchrist’s beginning in the spring of 2007, culminating in February of 2009, when he named Forde his “director of border operations.” Gilchrist’s Minuteman Project site avidly promoted Forde’s operations –– conducted under the name of her own group, “Minuteman American Defense” –– and he defended her from critics within the nativist anti-immigrant movement.

Their association dates back to June 2007, when Forde organized an “Illegal Immigration Summit” in Everett, Wash., featuring Gilchrist as the keynote speaker. At the time, Forde was no longer a member in good standing with the state detachment of the Minuteman Civil Defense Corps, operated by Simcox, Gilchrist’s former cohort. Within the month, Forde had formed MAD and cultivated her relationship with Gilchrist, first sponsoring the “summit” in Everett featuring herself and Gilchrist that June. Forde cultivated the relationship further that summer of 2007 by organizing border watches in Arizona, alongside such other nativist leaders as Glenn Spencer. She was photographed that summer with Gilchrist, admiring Spencer’s remote-controlled airplane and scanning the horizon in search of border crossers.

Forde kept in touch with Gilchrist and subsequently arranged for him to make an appearance in February 2008 at Central Washington University in Ellensburg, about a hundred-mile drive from Seattle. Gilchrist at the time was embroiled in heated lawsuits and disputes with his former board of directors over ownership of the Minuteman Project, and he no longer had any functioning presence on the borders; Forde offered to step up and take on the job. Gilchrist became so enamored of Forde that, on February 9, he directed his staff to “put Shawna in the website as our border patrol coordinator.”

But Forde’s involvement would become a grave liability in a matter of a few short months.

Shortly after midnight on May 30, 2009, Forde and a group of three men invaded the home of a small-time marijuana smuggler named Raul “Junior” Flores in rural Arivaca, Ariz., and shot its three occupants: Flores, his 9-year-old daughter, Brisenia, and his wife, Gina Gonzalez. However, Gonzalez was not fatally wounded and, after playing dead, she drove the gang from her home in a hail of gunfire that lightly wounded the chief gunman, a white supremacist serial killer from Washington state named Jason Eugene Bush.

The day after the murders, Forde posted on the Minutemen Project website, boasting of having “boots on the ground” in Arizona, and citing the deaths at the Flores home as part of a fundraising pitch, in Forde’s inimitable semi-literate style: “A American family was murdered 2 days ago including a 9 year old girl. Territory issue’s are now spilling over like fire on the US side and leaving Americans so afraid they will not even allow their names to be printed in any press releases.”

So it was with a hint of irony, in his interview with Berliner, that Gilchrist explained he would continue to rely on his former protocols when it came to making this new iteration of the Minutemen different than the previous one: “It is only by one rule that I would expect people to present themselves and participate, and that one simple rule is: Whatever you do, you stay within the rule of law. And there are no exceptions.”

Gilchrist continued to refer reverently to “the rule of law” when Berliner pressed him on the issue: “How are you going to be able to control everybody and make sure that the people representing the Minutemen and along the border are indeed all within the letter of the law, and aren’t getting in the way of the U.S. Customs and Border Patrol, or even the National Guard, who’s now there in Texas?”

“I broadcast one message,” Gilchrist replied, again after a long pause. “Like me, you are an independent, American sovereign person. You have the right, the irrevocable right, supposedly, to freely and peaceably assemble on U.S. territory and bring your grievance forward. It’s each man, woman, and child for him- and herself, on their own, under their own recognizance, their own responsibility. If they go beyond the rule of law, they can [to be] expect arrested, cited, and prosecuted, it’s as simple as that. And it’s something we should be doing to the illegal aliens that come into this country, not to innocent American citizens who simply want to present their grievance. “

The irony here is that Shawna Forde, too, regularly preached about “the rule of law,” and how the “illegal alien invasion” was a slap in its face. Indeed, she even placed the words “Rule of Law” at the center of the logo she had designed for her MAD website.