Confessed murderer David “Joey” Pedersen, who killed four people including his father during a murderous rampage in 2011, says he regrets only one thing: being arrested before his racist revolution really got underway. 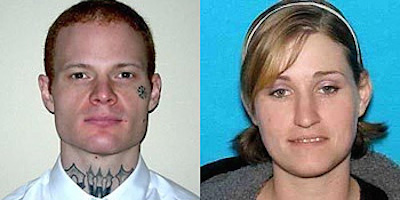 Pedersen, who was sentenced to two life-terms in prison on Monday in U.S. District Court in Portland, Ore., offered no apologies for waging his racially motivated 10-day killing spree that started with the murders of Pedersen’s father and stepmother in Everett, Wash. Instead, the 34-year-old killer told the court that he could not sit by while “western identity is being destroyed” by other cultures.

“I offer no excuses because none are needed," Pedersen told Senior U.S. District Court Judge Ancer Haggerty, adding that he regretted being caught “before I really got underway,” The Oregonian reported.

Pedersen was previously sentenced to two life terms in prison in Washington State after confessing in 2012 to the fatal shooting of his father, David “Red” Pedersen, and stepmother in Everett, Wash., believing his father to be a child molester and his stepmother his apologist.

After those murders, Pedersen and his girlfriend, Holly Ann Grigsby, fled to Newport, Ore., where they kidnapped and killed 19-year-old Cody Faye Myers, mistakenly thinking he was Jewish. The couple then drove on to Sacramento, Calif., hoping “to kill more Jews,” but were arrested in Eureka, Calif., after fatally shooting Reginald Alan Clark, 53, a disabled black man, and stealing his truck. Pedersen and Grigsby said they murdered Clark because they viewed him as a “Negro degenerate.”

Once associated with a gang known as “Aryan Death Squad,” Pederson used his sentencing hearing on Monday as a public forum to blast the U.S. government and the U.S. Attorney’s Office in Portland.

“I can only laugh sardonically that I sit here, being sentenced for crimes for which the United States government has accused me,” Pedersen said, criticizing, among many things, U.S. support of Israel and the United States’ use of drones.

Pedersen also “took aim at those prosecuting his case, which was at risk of unraveling because of serious allegations of misconduct” by an Oregon State Police detective, The Oregonian reported. At a previous hearing, “witnesses testified that the investigator failed to turn over evidence, backdated and shredded evidence records, collected private legal phone calls between Pedersen and his defense team and lied when challenged about his handling of the case,” the newspaper reported.

“I feel the malfeasance at the [U.S. Attorney's Office] is nothing short of remarkable,” Pedersen said at the hearing.

In an unusual twist to the case, The Oregonian reported Sunday that Pedersen was treated in jail to a special “homemade meal of grilled salmon, greens, a cheese plate and dessert brought in by his eight-person defense team” last May. The meal came after his defense attorneys filed a motion to have the criminal charges against him dismissed because prosecutors who “acted in bad faith had violated his constitutional rights.

Defense attorney Rich Wolf told the newspaper that federal prosecutors “pulled strings to make the meal happen because they were eager to put an end to Pedersen’s criminal case –– thereby avoiding further embarrassment and damage over colossal missteps they made in the handling of Pedersen's case.”

It wasn’t the first time the killer got a special jailhouse meal while plea-bargaining with prosecutors. In March 2012, when Pedersen pleaded guilty in Snohomish County Superior Court in Everett, Wash., he joked and offered a wisecrack about being promised a “double whopper with cheese” as part of that plea deal.

Grigsby pleaded guilty in March in federal court in Portland to a racketeering charge, encompassing various criminal acts she and Pedersen committed in Washington, Oregon and California, including murder, kidnapping, use of firearms during crimes of violence, transporting a stolen vehicle, unauthorized use of bank cards, aggravated identity theft, carjacking resulting in death and felon in possession of a firearm.

Federal investigators and court document say the two “would identify, kidnap and murder targets on the basis of race, color, religion and perceived ‘degenerate’ conduct to further their white supremacist movement.” An indictment also says that Grigsby and Pedersen were involved in “promoting and advancing a white supremacist movement to purify and preserve the white race and ‘reclaim our country.’”

When Grigsby, 27, was sentenced to life in prison last month, she apologized to the victims’ families, but also said she regretted her actions had damaged a white supremacist movement she still embraces, The Oregonian reported.

“My actions have further damaged the reputation of a movement misunderstood,” Grigsby told the court. “I deeply regret this. Although I had nothing but the best of intentions, the bridge to Valhalla is not paved with good intentions…”

Pederson, who has a large “SWP” tattoo on his neck –– Supreme White Power –– had previously served federal prison time for threatening to murder the federal judge who handled the case of white separatist Randy Weaver.