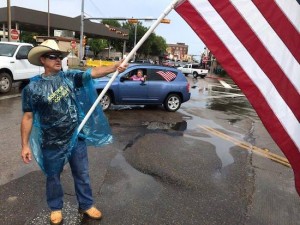 Pete Santilli keeps trying –– and failing –– to organize protests that will shut down border crossings between the United States and Mexico. What’s more, he hasn’t been completely honest about it.

The latest effort by the extremist right-wing radio host was a multi-state “Border Convoy” campaign that featured protests at various stops along the multi-day route. Participants signed a petition declaring that they “oppose Barack Obama’s foreign invasion of our country” and demanding that authorities “secure our border.”

And while at least this time there were no problems with his vehicle’s license plates (unlike Santilli’s previous border-shutdown effort, which collapsed into a small heap of frustrated protesters), the campaign was once again notable for failing to achieve anything.

But you wouldn’t know that if you listened to Santilli.

The idea was for a string of vehicles, beginning on Aug. 1, to travel from Murrieta, Calif., and follow the border through Arizona and Texas, ending at the border crossing in Brownsville, Texas, on Aug. 9. Murrieta was the point of departure for Santilli’s earlier botched attempt to shut down the border, largely because the town has been the focal point of anti-immigrant protests directed at the influx of child refugees from Central America. A recent report from the Center for New Community details how these protests were orchestrated by a coalition of white nationalists and various nativist extremists.

But along the way, the protest was largely ignored until the convoy began encountering resistance from counter-protesters at their stops.

After departing California, the convoy headed for Phoenix, Ariz., and descended on the offices of Republican Sen. John McCain, whose moderate stances on immigration have drawn the ire of the nativist extremists. While at McCain’s offices, Santilli led the crowd in chanting against legislation McCain has cosponsored to end the crisis with Central American refugees, apparently because it makes it illegal to identify where the refugees are being transported. However, McCain was not at the office that day, and the gathering quickly broke up.

Then the convoy headed for Texas, where it began encountering stiffer resistance. In El Paso, someone driving a black pickup truck joined the convoy and began slowing the group’s progress. When police intervened and pulled the convoy over, the people in the pickup complained to police that someone in the convoy had pointed a rifle at them.

The El Paso Times reported that El Paso activist Miguel Juarez was among the counter-protesters, and he filed a claim that someone in the convoy had pointed a rifle at them. The convoy later filed a police report accusing Juarez of filing a false claim, as well as another claim that the protesters had tried to force them off the road.

"I told him I was not lying that the rifle episode had occurred and that we had witnesses," Juarez said. "We felt threatened by the convoy member with his rifle and felt a duty to report it to police,” Juarez said in a written statement.

And what would a right-wing border protest be without the concocted claims that drug cartels had targeted their activities? There was plenty of paranoia and phony claims of persecution.

In Van Horn, Texas, according to reports, convoy members were forced to evacuate a hotel at 4:30 a.m. by members of the “Operation Secure Our Border” militia, who informed members that they were being watched over by militia. Those same militiamen, according to accounts, had determined that drug-cartel operatives had surrounded the Comfort Inn hotel where the convoy members were staying and were preparing to ambush them.

“Militia immediately acted to evacuate the property of convoy vehicles and raced the convoy to an undisclosed location some 45 miles away,” explained the convoy’s press release. “While convoy members were initially rattled and concerned by the sudden move, the gravity of the threat was later realized and Militia involvement was met with widespread appreciation.”

The account also claimed that “county law enforcement” had confirmed the presence of the threat. However, Culberson County Sheriff Oscar Carrillo ridiculed the report as “fake.”

“Nothing of that nature happened here,” Carrillo said.

According to the El Paso Times, Carillo’s detectives interviewed several hotel owners in the area and could find no witnesses that the event had even occurred.

Finally, the convoy reached a kind of climax on Aug. 8 in McAllen, Texas, where Santilli led a protest against the supposed dumping of “illegal aliens” at the local bus station. There they encountered an even larger group of counter-protesters who outnumbered them.

“It's fine that they are here, but their message of hate and ignorance is not welcome in the valley and they shouldn’t bring it with them," said John Michael Torres of La Union del Pueblo Entero, a pro-immigrant advocacy group.

The next day, led by a contingent of bikers affiliated with the convoy calling themselves the “U.S. Defenders,” Santilli’s convoy intended to conclude while “shutting down” the border crossing in nearby Brownsville, Texas, where the object of the protest in  was ostensibly the arrest of U.S. Marine Sgt. Andrew Tahmooressi, whose continued detention in a Mexico jail has become the latest cause celebre of the extremist right.

The protest managed to disrupt traffic briefly (for about 20 minutes) at the crossing, and the Border Convoy’s Facebook page boasted: “We fully shut down the main lane of traffic coming through the entry port into Brownsville, TX this am. Thanks to the Brownsville group and Border Convoy travelers for demanding our Marine be allowed to come home!”

Again, the convoy encountered a contentious and large number of counter-protesters. “These people are coming out an disrupting our communities, and that’s what we don’t want,” one counter-protester told a KGBT-TV reporter. A number of commenters at the convoy’s Facebook page also claimed that even the attempt to stop traffic was a failure: “Didn't shut anything down, liars,” said one. “You simply stood in the way as folks drove around you.”