Members of the New Empire Knights of the Ku Klux Klan (KKK) from three separate states have announced plans to travel to Ferguson, Missouri, to guard “white businesses” near riots that have erupted after a police officer shot and killed 18-year-old Michael Brown.

“With blacks out of control, we have our Missouri Realm going to areas near Ferguson,” wrote Charles Murray, the group’s Imperial Wizard. “We can’t have blacks robbing and murdering innocent whites.”

This is only latest from the Klan, which has sought to capitalize on the violence and discord in Ferguson. Last week it announced that their members would travel to Sullivan, Missouri, to prepare for a fundraiser for “a cop who shot a n----- criminal.” The KKK group has not said which state's chapters are heading to Missouri.

Brown was shot by a Ferguson police officer six-times, including twice in the head, on August 9, an autopsy has found. He was unarmed.

In the wake of his death, nightly protests at the site of the shooting have become increasingly violent, and police armed in riot gear have become a nightly site of the city’s streets, dispersing protestors forcibly with tear gas and rubber bullets.

The situation in Missouri intensified over the weekend with Governor Jay Nixon announcing a state of emergency, nighttime curfew, and the deployment of the National Guard after protestors had used Molotov cocktails to attack a police command center. On Monday night, two people were reported shot, four policemen sustained injuries from rocks or bottles, and 31 protestors were arrested. 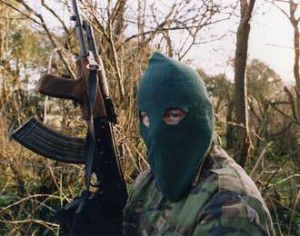 A photo the New Empire Knights of the Ku Klux Klan used with their announcement.

Murray, who posted a picture of a masked man carrying an assault riffle along with the announcement of the group’s intentions to travel to Ferguson on Monday, has already warned readers of the group’s blog that they “have guns (and more).”

On Stormfront, the largest online white supremacist forum, reactions have been surprisingly mixed to the announcement, with one poster suggesting that, “This is will make a bad situation worse.” Yet according to the New Empire Knights, “No illegal acts will be tolerated,” the group declared on its website.