Border militiamen like to tell the public that they offer a simple solution to a complex problem – putting “boots on the ground” along the United States’ border with Mexico as a way to deter would-be immigrants from making illegal crossings, or as they are more inclined to put it, “stopping the illegal invasion of America.”

But already, federal agents have found that their unsought presence in recent weeks on the border in Texas and Arizona is making a difficult job much more complicated and possibly lethal. In some cases, agents are drawing down on the border vigilantes, and in one incident actually fired upon them. Another confrontation involved bat scientists who happened to be gathering field data when they encountered the armed militiamen.

A recent Associated Press report from Christopher Sherman described an incident along the Rio Grande involving an outfit calling itself the Texas Militia, who showed up unbidden at the midnight arrest of a group of border crossers in a canal near the Texas river. At first, the story reported, the Border Patrol officers assumed the men were part of a state-run tactical squad, but then were stunned to find that these well-armed men had “no law-enforcement training or authority of any kind.”

“The situation ended peacefully with the immigrants getting arrested and the Border Patrol advising the militia members ‘to properly and promptly’ identify themselves anytime they encounter law-enforcement officers,” the story reported. “But the episode was unsettling enough for the Border Patrol to circulate an ‘issue paper’ warning other agents.”

Indeed, the story appeared only two days after another border-militia outfit calling itself “Camp Lonestar” posted a video on YouTube showing a group of border crossers swimming the Rio Grande, while the self-described member of the “citizen militia” shooting the video verbally harassed them and told them to go back to Mexico and cross legally. The crossers appeared to be two men and a woman, and the militiaman described the men as “coyotes” – human smuggling operators.

Last Friday in a wooded area near the border outside of Brownsville, a Border Patrol agent in pursuit of a group of fugitive immigrants fired four shots at a camo-clad militiaman who happened to appear in the vicinity. The man dropped his gun and identified himself as a militia member to the border agent.

An incident on the Arizona border near Sonoita, in rural Santa Cruz County, last week was even more chilling. A group of scientists conducting counts of the bats occupying Onyx Cave was hit with a spotlight as they walked back to their vehicles in the dark, then shouted at in Spanish by men who identified themselves as militia members out “protecting the border.” After identifying themselves, the scientists walked back to their campsite and met the apologetic militiamen in person. 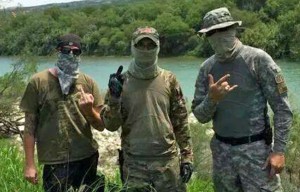 While the presence of border militias – which initially stumbled when they were announced last month, but have finally picked up steam in recent weeks, with as many as 13 different units reportedly operating on the border in Texas now – is ostensibly about making the border more secure, the presence of untrained, utterly anonymous gunmen with no accountability to anyone has been an increasing concern for law-enforcement professionals working the border.

"CBP appreciates the efforts of concerned citizens as they act as our eyes and ears. Securing our nation's borders can be dangerous. Interdicting narcotics and deterring and apprehending individuals illegally entering the U.S. requires highly trained law enforcement personnel," the statement said.

Right-wing radio host Pete Santilli spent time, while on his trip to Texas as part of the failed “Border Convoy”, with one of these border militias – namely, the participants at “Camp Lonestar.” Santilli took footage of the patrols of the border these vigilantes made in their vehicles.

The man claiming to run this militia is an Arizona man named Joe O’Shaughnessy, who Santilli had profiled on YouTube in an extended interview a few weeks previously. O’Shaughnessy said he and several others moved their border-watching operations to Texas in recent weeks as the call went up among his fellow antigovernment “Patriot” movement believers to try to stop the flow of refugee children over the Texas border.

O’Shaughnessy and several of his fellow “Camp Lonestar” participants described their activities to Santilli, and described their motivations for prowling the desert borderlands.

Most of these motives revolved around “patriotic” duty to defend the homeland, and a belief that the nation is being “invaded” by an “enemy.” Some cited the supposed presence of Middle Eastern border crossers, while others described at length the various foul diseases being transported into the United States by the child refugees.

Notably, most of them claimed that the Border Patrol officers they encountered actually welcomed their presence as “another set of eyes on the border.”

Other militiamen have made similar claims in other news accounts. In a piece by Maxwell Barna for Vice, a militiaman named Parris Frazier – the self-described leader of a border unit called Whiskey Bravo, which patrols a stretch of the border in Arizona – claimed that his men are friendly with Border Patrol agents.

“Every day when I’m driving to and from Sierra Vista down here to where I’m at, I get stopped, I shake their hands, and we talk, but we don’t really talk about what’s going on,” Frazier said, speaking from an area east of Nogales, roughly a half mile inside the Arizona border. “Every now and then I’ll ask a question and they’ll give me a nod yes or no.”

However, CBP officially maintains that heavily armed wannabe border patrolmen are not particularly welcome in sensitive areas where they are encountering dangerous situations on a daily basis.

And local law enforcement are apparently inclined to agree. According to the Los Angeles Times, when a border militia recently camped out near an international bridge to Mexico in Pharr, Texas, local sheriffs marked their presence by circulating a bulletin among each other warning of the men’s presence. Some sheriffs directly declined the militia’s help, while others simply remained silent.

"How do they identify themselves? Do they have badges? How do we know who they are?" asked J.P. Rodriguez, a spokesman for the Hidalgo County Sheriff's Office. "If they're all just dressed in camos, it's kind of hard to distinguish whether they're law enforcement or not. ... There's a lot of potential for stuff to go wrong."