After years of rhetoric threatening violence, the neo-Confederate League of the South (LOS) is training a uniformed, paramilitary unit tasked with advancing a second southern secession by any means necessary, Hatewatch has learned.

According to anonymous sources from within the LOS, as well as leaked internal communications, the LOS secret unit has been dubbed “The Indomitables”and appears to be stacked with white supremacists, former Klan members and neo-Nazis.

Michael Hill, in a note offered to encourage his Indomitables, said, “We desire that our women and children be warm and snug while the world outside rages. And as our due for that we must face the world.”

The Indomitables were conceptualized at the LOS national meeting earlier this year and appear to be coming online quickly, with Floyd Eric Meadows, 43, of Rome, Ga., who also goes by Eric Thorvaldsson online, in charge of “training,” according to sources within the group and internal documents.

A veteran of both the U.S. Army and Navy with 12 years of service, Meadows has been an active LOS member for several years, and his personal Facebook account is filled with pagan iconography and photos of his weapons. He posts often about "earning" his red bootlaces––awarded in skinhead culture for drawing blood for ‘the movement’—and his desire to throw boot parties for enemies of the LOS. Meadows also has posted pictures of himself standing with assault rifles in front of a confederate flag and has frequently quoted Robert Barnwell Rhett, a South Carolina statesman who was dubbed the “Father of Secession”for his efforts leading up to the Civil War. 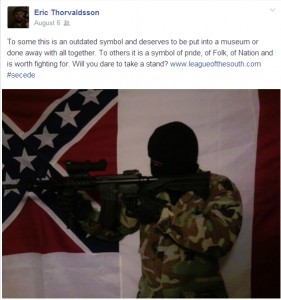 Telephone messages regarding the Indomitables were left with Hill and the LOS this week, specifically to ask how and where the League hopes to use the unit, and to what end. They were not returned. But within a day of those message being left, Hill addressed the question on the LOS blog.

“Even if we are –– and you really have no idea on earth if we are or not ––setting up a Southern militia or some other form of paramilitary organization, we are doing nothing that free men have not done for centuries. Deal with it and stop your whining,”Hill wrote.

Unfortunately for Hill, we do have an idea. Internal Facebook posts leaked to Hatewatch show that Hill is well aware of progress in forming his militia, which he refers to by name.

The formation of the Indomitables comes after years of escalating and violent rhetoric from the League, as well as a search for more ideologically extreme white nationalists to enliven their membership –– a pattern that has been ongoing since 2007, when the LOS national conference was titled “Southern Secession: Antidote to Empire and Tyranny.” Just this week, for example, blogger Spelunker published a detailed profile of LOS member Abe Monroe, who attended a rally with LOSers last November and who just posted to Facebook pictures of the words “White Power”in block letters tattooed with a swastika across his back. While Monroe is a minor player, he is representative of that new type of southern nationalist the League now seeks.

That is especially true if one takes to heart Hill’s own words, which show an increasing extremism. In an essay published last month on the LOS website, Hill argued that the Second Amendment extends to “weapons systems," touted guerrilla warfare applications and listed “primary targets”as the fight for a second secession continues.

“The primary targets will not be enemy soldiers; instead, they will be political leaders, members of the hostile media, cultural icons, bureaucrats, and other of the managerial elite without whom the engines of tyranny don’t run,”Hill wrote. He concluded the essay by quoting Psalms: "Blessed be the Lord my strength who teaches my hands to war and my fingers to fight.”

This isn’t the first time the League has flirted with southern nationalists with a calloused trigger finger, however. Michael Tubbs, a former Green Beret and demolitions expert, and another soldier robbed two fellow soldiers of their M-16 rifles at Fort Bragg, N.C. “This is for the KKK,”the holdup men shouted as they fled. Tubbs pleaded guilty to theft of government property and conspiracy to transport guns and explosives across state lines after prosecutors later discovered a weapons cache. 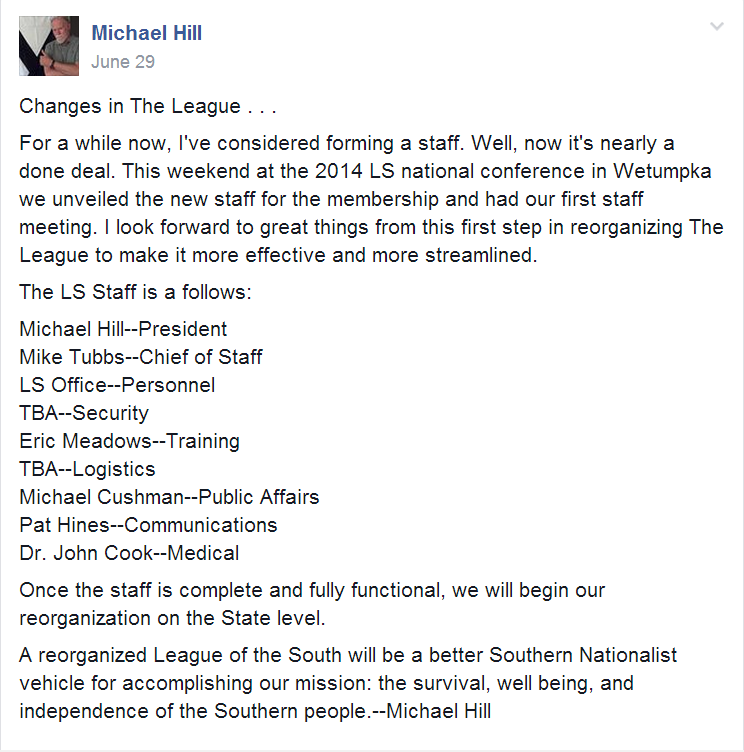 Editors' Note –– Keegan Hankes contributed to the reporting of this article.