Self-described “sovereign citizen” David Darby wants everyone to know that he has no intention of getting involved in any armed standoffs with any law enforcement officers from Clark County, Wash., where he lives. He says he just wants his day in court – even though, whenever he has had one of those, he has lost. 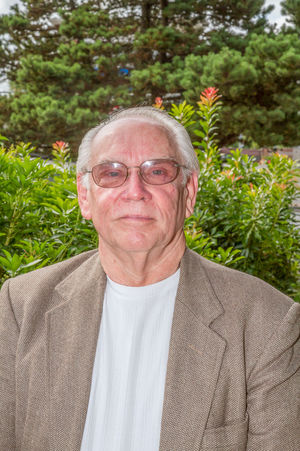 Most recently, the 69-year-old Darby – a longtime antigovernment “Patriot” movement activist, dating back to the 1990s, and political gadfly – was informed by a Superior Court judge that his 4.7-acre property in rural Amboy would be put up for auction, following foreclosure proceedings brought against him by Clark County for failure to pay his taxes.

Darby has only a few days left to wait. The auction of his property is scheduled to take place between 8 and 11 a.m. on Sept. 16.

Darby, claiming that he is a “citizen” exempt from such duties, stopped paying his taxes in 2008, beginning a long-running dispute with the Clark County Treasurer’s office that culminated in 2013 with foreclosure proceedings on his rural home – a mobile home on raised blocks — and its accompanying wooded acreage.

However, as Darby made clear back then, he purposely forced these proceedings as part of his strategy to get the issue of his claims to a “land patent” on the property heard in a federal court. "I've been setting up the strategy to do this because no one has ever gotten sovereign ownership of land in the courts," Darby said. "The only way to set it up was to go into foreclosure. … This isn't about my land; it's about the [state] constitution."

Indeed, Darby claims that the current Washington constitution, passed in 1889, is not valid – and that the state’s proper constitution is actually one that was drawn up in 1878, when statehood was first suggested. He also characterizes this document as explicitly creating sovereign citizenship for state residents, as well as outlawing property taxes and liens on property.

“We were already a state before they did the 1889 constitution,” he insists.

He claims he went through a complicated legal process of filing various affidavits and making public proclamations that resulted in him owning a “land patent” on his property.

"Anyone who buys my land has a big problem because I have a lawful title to my land," he told a reporter.

Darby has been active in far-right circles in Washington state since the 1990s, when he was the Clark County representative of the U.S. Militia Association, a “constitutionalist” militia-organizing outfit directed by an Idaho man named Samuel Sherwood.

It was then, Darby told Hatewatch, that he first became interested in “common-law courts” and other sovereign citizenship theories. He says he was originally drawn to far-right “constitutionalist” legal theories by Sherwood and other far-right figures, but then became so thoroughly devoted to sovereign citizen theories.

“I found out about [sovereign citizenship] once I found out that the Constitution does not apply to U.S. citizens, it only applies to citizens of the United States of America, which ended in 1861 when martial law was instituted by Lincoln,” Darby says. “I’ve actually studied the law, the legislation, and I’ve been studying this now ever since those days, and I’ve figured it out for myself. It’s not that I’m listening to anybody else, I’ve figured it all out.”

Darby told reporter Tyler Graf of the Daily Columbian that anyone who buys the property will have to force him to leave. "We'll have to see what happens," Darby said. "I don't plan on leaving. I don't know what they're going to try. … They know I am very serious about this. All I want is my constitutional rights protected, like every other citizen in Washington."

That means the matter may eventually come down to a sheriff’s deputy arriving with an order to remove Darby. But Darby told Hatewatch that if matters get that far, he intends to leave peacefully.

“I’m not going to do anything radical or anything,” he avers. “I have no intention of anything like that.”

However, he said that things won’t get that far, because he intends to file a federal lawsuit against Clark County this week – as soon as they put his property up for auction: “I’m getting ready to file another suit, now that they’ve hurt me, in Superior Court,” he told Hatewatch.

Darby has written about his beliefs about sovereign citizenship at length and posted several lengthy exegeses on the Internet about them. According to a study published about his filings, Darby has claimed to have received financial backing from an anonymous East Coast organization.

Darby says he understands that people espousing sovereign citizen beliefs have gotten into armed standoffs and shootouts with law-enforcement officers over situations like his. Those people, he says, are not like him.

“The problem is that they don’t understand that the officers and all these are only doing what they’re told to do,” Darby says. “We understand that. We’re not going to have any armed confrontation. We don’t want anybody hurt. I would rather have my day in court. And that’s all I’ve ever wanted.”