Last Friday, a jury in an Orlando, Fla., federal courtroom found William “Bill” White guilty of sending death threats to officials in May 2012. Sentencing is set for Nov. 21, when White, 37, will face the possibility of decades in prison. 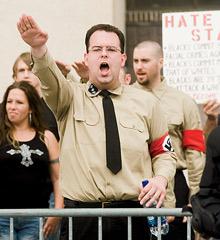 White is already incarcerated in Florida for sending threats to other individuals. Before he was arrested in 2008, White had held posts in neo-Nazi groups and ran the movement gossip site, Overthrow.com. White is a particularly obnoxious racist, frequently using the most crude racial slurs available and constantly harassing people he doesn't like by calling for their lynching or worse. He once put President Obama on the cover of his publication, the National Socialist, with a gun sight over his face. The text read, “Kill this N-----?”

One of the threats was received by the Southern Poverty Law Center in the form of an unpublished comment submitted to this blog on May 20, 2012. The threat was posted under the name “Charlie F------ Manson” and the email address listed by the poster was nslf_helterskelter@hotmail.com. NSLF presumably refers to the National Socialist Liberation Front, a neo-Nazi group that has been defunct since the 1980s.

The threat sent to Hatewatch included the names and addresses of Florida officials and threatened their families. It read in part, “We are at your houses, we are at your kids houses we are at your grandkids houses and we are sitting outside their schools.” Another part of the post said, “The DEVIL is coming FOR HIS DUE. And when he comes, there WILL BE BLOOD.”

I testified in the trial last Tuesday because one of the threats was posted to our blog. Because I was a witness, I was not privy to the trial testimony.

According to the Orlando Sentinel, most of the trial centered on proving that White was behind these threats. The email address was registered to the no longer functioning National Socialist Liberation Front and the posts used an untraceable Internet protocol address, according to testimony.

The Sentinel reported that investigators found a lengthy Facebook rant that the prosecution contended White left on a pro-American Front page. On White’s profile, investigators found solicitations for the names and addresses of officials in the case as well as tirades advocating “political terror.” The Facebook page also referred to the threats: “To my knowledge, the Florida state officials have still not complied with the demands to release the prisoners.”

White’s federal defender, Larry Henderson, contended that the government failed to prove White was “the person sitting behind the keyboard.” But U.S. Attorney Vincent Chiu disagreed. “You look through the evidence, and it only leads you to one place,” Chiu said.