The nightmare has happened again.

A massive manhunt continued today for a suspected antigovernment sniper and survivalist who allegedly gunned down a Pennsylvania state trooper and seriously wounded a second trooper during a shift change on Sept. 12.

It is at least the third deadly ambush of North American police officers by apparent antigovernment extremists since the beginning of the summer. The attacks have left six officers dead from Canada to Las Vegas. 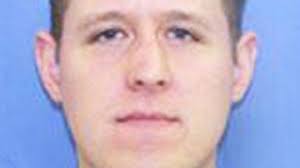 On June 4, three Canadian police officers were lured to a subdivision in the province of New Brunswick and shot and killed by a heavily armed man who slipped away into a knot of dense woods. The suspect, who had a history of posting numerous hardcore pro-gun and anti-police statements on his Facebook page, was captured after schools, businesses and public transportation were shut down.

A few days later in Las Vegas, a man and wife who harbored antigovernment views ambushed two police officers as they ate lunch in a pizza restaurant. The couple, Jerad and Amanda Miller, also shot to death a bystander in a nearby Wal-Mart, where they made their last stand. Police shot and killed Jerad Miller. Amanda Miller took her own life.

Last Friday, shortly before 11 p.m., Cpl. Bryon Dickson, 38, of the Pennsylvania state police was shot and killed as he walked towards his patrol car, which was parked in front of the Blooming Grove police barracks in rural northeastern Pennsylvania. Moments later, as he approached the barracks to begin his 11 p.m. to 7 a.m. shift, Trooper Alex T. Douglass, 31, was also shot and seriously wounded by a bullet from a .308-caliber rifle.

The sniper then vanished into the dense and dark woods.

“He has been described as a survivalist,” Noonan told a Tuesday news conference. “He has made statements about wanting to kill law enforcement officers and also about wanting to commit mass acts of murder.”

At a news conference today, state police Lt. Col. George Bivens said Frein is a military re-enactor, who, “in his current state of mind” now “appears to have assumed that role in real life,” according to Scranton Times-Tribune.

Bivens also said Frein has a “long-standing grudge against law enforcement and government in general since at least 2006” and altered his appearance before the shooting, shaving the sides of his head with a “wider than a Mohawk” on top.

“I’d like to directly address Eric Frein again,” the police colonel said. “In the event you are listening to this broadcast on a radio, on a portable radio while cowering in some cool, damp hiding place, I want you to know one thing: Eric, we are coming for you. It’s only a matter of time we bring you to justice for committing this cowardly act.”

Although authorities described the suspect as having antigovernment views and survivalist skills, no further details were provided about any political affiliations or ideology.

Frein’s father, a 28-year U.S. Army veteran and retired major who taught his son how to shoot a rifle, reportedly told police that Frein “doesn’t miss.”

According to the Wilkes-Barre, Pa., Times Leader, about 200 law enforcement officers have been combing the dense forests and rural landscape of northeastern Pennsylvania, searching for Frein but “we have no idea where he is,” Noonan said at the news conference.

Cpl. Dickson’s last moments of life were captured by the station’s surveillance system, according to the criminal complaint filed against Frein.

Dickson’s shift was almost over as he walked towards his vehicle parked in front of the barracks. Moments after exiting the building, “he immediately dropped to the ground in front of the door where he remained motionless,” according to the complaint.

Inside, a communications operator heard what she thought were firecrackers and looked out a window and saw Dickson on the ground. She ran outside and he told her he had been shot. While she was attending to Dickson, another shot from the nearby woods rang out. The operator said she saw “a cloud of white residue on the floor of the lobby.”

She retreated back into lobby. She called 911 but the call did not go through. She returned to Dickson’s side and he asked her to help him inside but she was unable to lift him.

Meanwhile, Trooper Douglass had pulled into a nearby parking lot and was approaching the barracks to begin his shift when he spotted Dickson still on the ground just outside the lobby. Then Douglass was hit and went down.

Douglass, however, was able to crawl into the lobby where another trooper pulled him out of the line of fire, deeper in the building.

Another trooper drove an SUV in front of the door as a shield while several other troopers pulled Dickson into the building.

He was pronounced dead.

Douglass was airlifted to a hospital in stable but serious condition.

The sniper fired four rounds in about 90 seconds and then disappeared.