The most recent attempt to protest federal immigration policies by shutting down the nation’s ports of entry along the Mexico border has, to no one’s great surprise, turned out to be another fizzle. 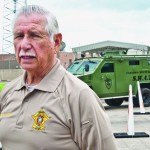 Calling itself a coalition of antigovernment “Patriot” groups angry about immigration enforcement, “Shut Down All Ports of Entry” had attempted to organize a protest Saturday morning at a number of the United States’ border crossings wherein participants would drive up to the port, turn off their trucks and cars, and walk away from them.

But on Friday, the organization took down its Facebook page and removed all content from its website except for a notice announcing that the protest had been cancelled out of fears of retaliation by the drug cartels.

“There has been an unsubstantiated threat of mass violence to attendees, along with very suspicious activity on the Facebook site,” wrote organizer Satsyi Barth. “These two items are more than enough for me to immediately stop any protest that was going to occur. Your lives, and the lives of our law enforcement, are more important than any protest.”

According to one news report, however, a small group of six protesters comprising three small cars did arrive at the port of entry in Brownsville on Saturday.

“We paid people overtime,” Lucio said. “Yes, I hate to waste that kind of money. As law enforcement, you never know what’s going to come up. You use these resources and other resources. We take care of people in the U.S.”

Lucio said that about 30 sheriff’s deputies, including a 15-man SWAT team, and a number of Texas Rangers and FBI officers were present at the Veterans and Gateway bridge crossings on Saturday.

It is unclear whether actual threats against the protest were delivered by Mexican drug cartels, or there simply was not enough support for the protest. Though the organizers called themselves a “coalition” of “Patriot” groups, Hatewatch could not find any other groups aligning themselves with the protest or publicly supporting it. Organizers told Hatewatch that members of other “Patriot” groups planned to participate, but could not name them.

Barth told the right-wing Breitbart website that the protest shut down because of threats:

Cartel threatening mass blood shed. One of the guys in Texas was followed into a Walmart, on the freeway, then approached at his hotel. At the same time, I got a bunch of requests to join the [Facebook] page from Sonora Mexico. I grabbed as many as I could, but realized it was getting out of control fast and I didn’t want them to see who the attendees were. This is after it was requested that we avoid certain areas, because of the recent border threats, unrelated to us. The cartel has people at every port listed..waiting for us, so I was told.

Two previous “Patriot” attempts at shutting down key U.S.-Mexico border crossings–one led by radio host Pete Santilli in July, and another in August by the Santilli-led “Border Convoy”–ended as non-events with similarly dismal turnout.