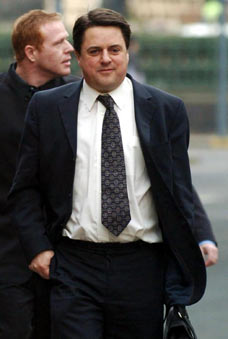 The British National Party (BNP) announced yesterday that it expelled its former leader, Nick Griffin, who was once convicted of Holocaust denial. Griffin had been in charge of the white’s only BNP for 15 years until he was removed from his post last July.

The BNP accused Griffin, whose most recent position was honorary president, of harassing party members, attempting to destabilize the party and “causing disunity by deliberating fabricating a state of crisis.” The BNP’s conduct committee published a detailed list of complaints about Griffin’s behavior including “disobeying legitimate, constitutional instructions,” “publishing, causing to be published or being reckless as to the publication of untrue allegations against the Party,” and in one case “making physical threats” against a party member.

Griffin’s woes had been growing since he lost his seat in the European Parliament earlier this year and declared personal bankruptcy “due to a series of legal bills he ran up over several years as a result of both pursuing and defending a series of long-running cases,” according to the BNP.

Griffin has a long history of political activism in the United States. In the early 2000s, he frequently came to our shores to attend meetings of the American Friends of the British National Party (AFBNP), a group in the Washington, D.C. area that raised funds for the BNP. Its leader, Briton Mark Cotterill, was deported in 2002 after the U.S. Immigration and Naturalization Service (now known as the U.S. Immigration and Citizenship Services ) began investigating him. Their investigation was prompted by a Southern Poverty Law Center (SPLC) exposé that reported that Cotterill had raised some $85,000 for the BNP in contravention of U.S. law.

Griffin returned many times after Cotterrill’s deportation to speak at events put on by racist American groups. He spoke in 2008 to the Michigan State University chapter of Young Americans for Freedom, which was listed as a hate group by the SPLC. The year before, Griffin went on an extended college speaking tour that was partly supported by YAF and advertised by other hate groups, including the Council of Conservative Citizens. Griffin has close ties to American extremists including former Klansman David Duke and former members of the neo-Nazi National Alliance.