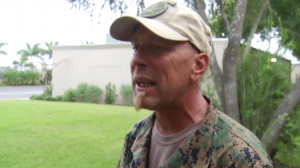 When ATF agents arrested Kevin “K.C.” Massey III at a Brownsville-area hotel last week on charges that he had been illegally carrying weapons while leading border-militia patrols in Texas, they found more in his hotel room than just guns and ammo. There was also a container of ammonium nitrate and fuel—a potent bomb in the making.

According to an inventory of items taken during Massey’s arrest, an “ammo box filled with ammonium nitrate (suspected) and fuel” was found in the room, which participants at Camp LoneStar—the border-militia operation at which Massey had been dubbed a “commander”—had described as a place rented out by the camp as “a place to take a shower and get a good night’s rest.”

As the San Antonio Express-News noted in a report on the arrest, ammonium nitrate, which can be purchased as a farm fertilizer, can make a potent explosion when mixed with diesel fuel and detonated. It was the explosive Timothy McVeigh used in his 1995 terrorist attack on the Murrah Federal Building in Oklahoma City.

Massey was arrested as the result of an ATF investigation that followed an Aug. 31 incident at Camp LoneStar in which a Border Patrol officer fired four shots at a militiaman named John Foerster, who dropped his weapon at the scene. After Massey and a companion arrived at the scene to vouch for Foerster, agents kept his AK-47 rifle and a .45 caliber handgun as part of their investigation.

Both Massey and Foerster were arrested for being felons in possession of a firearm last week. Additionally, U.S. Magistrate Judge Ronald Morgan ordered Foerster to remain in detention while undergoing a psychiatric evaluation.

Massey’s arrest has inspired a fresh round of paranoia among the ranks of his fellow “Patriots” on the border, who appear to be claiming that laws precluding felons from owning weapons are “unconstitutional.” One of his supporters on Facebook, in the midst of a long rant supporting Massey, argued: “What part of "shall not be infringed" do you not understand? any law made to keep a person from owning a gun is UNLAWFUL,and invalid from its inception!”

Another posteda lengthy discursion on federal authority’s supposed overreach in Massey’s case, and concluded that the state of Texas needed to intervene: “If what the federal government implies to be true by their persecution of K. C. Massey is true, then there is no need for the three branches of the government of Texas to exist. On the other hand, the government of Texas should take a more aggressive role, as the Supreme Court did, in limiting the overbearing and abused authority of the federal law enforcement agencies.”

In the meantime, an avid Camp LoneStar supporter has begun hawking T-shirts with the camp’s logo on them. She promises that “a portion of the proceeds” will go toward Massey’s legal defense fund. Other supporters also recently organized a “Slam for the Rights of K.C. Massey” as a fundraiser.