The League of the South seems to know no limits in how far to the right it will go. After years of increasingly violent rhetoric and warnings of unrest, (LOS) President Michael Hill has now announced that the LOS will "make contact" with the neo-Nazi and neo-fascist Greek organization Golden Dawn, a group that associations with a year ago would have been certain to prohibit LOS membership. 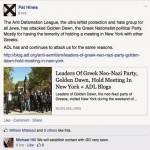 In a cryptic message posted to Facebook last week, Hill promised: “We will establish contact with GD (Golden Dawn) very soon.” To what extent and to what end remain unclear.

Contacting Golden Dawn in a show of solidarity represents one more development in the League's changing attitudes toward the more radical elements of the extremist right. From warning of impending insurrection, to forming secret paramilitary organizations, the League has gotten increasingly extreme in recent years. But aligning with the Golden Dawn does come as an unexpected surprise.

Since 2012, when the Golden Dawn claimed 18 of the Greek Parliament’s 300 seats, the party has embraced its fascist and neo-Nazi ideological underpinnings. They have made use of Nazi symbolism and have praised figures from Nazi Germany. Its members have taken xenophobic stances on immigration, and engaged in acts of violence.

That alone would have been enough for LOS leadership to distance itself from getting close to Golden Dawn not that long ago. In fact, Matthew Heimbach, co-founder of the white nationalist Traditionalist Youth Network, was ousted from the LOS after being caught cavorting with members of the National Socialist Movement, a neo-Nazi organization.

A short year later, Heimbach is back in the LOS and sharing the same views as Hill.

For his part, Heimbach last week traveled to New York City to show his support for the Golden Dawn as they held a meeting in Astoria, a historically Greek-American neighborhood. The conference featured Georgios Epitideios, a former general and Golden Dawn member of the European Parliament, who warned of the struggles the Greek people face “as the forces of globalism continue to wage an economic, social, and spiritual war against the Greek nation and the Greek Church.”

Just like Hill has professed, Heimbach left the event with new views.

“I have long been a Golden Dawn supporter, and this weekend of fellowship only reinforced what I already knew in my heart,” Heimbach wrote. “All traditionalists should support Golden Dawn.”