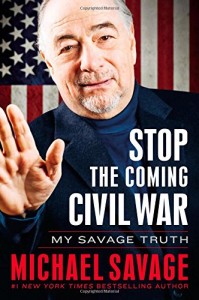 Given the title, you might think that Michael Savage’s Stop the Coming Civil War: My Savage Truth would be about preventing and healing the nation’s cultural rift before it erupts into violence. Instead, what he delivers is a manifesto accusing the Obama administration of fomenting just such a war—a war only far-right ideologues like himself can prevent.

None of this is really a surprise given Savage’s long history of incendiary right-wing extremism and hateful rhetoric. In recent months, though, Savage has been ratcheting up attacks to extraordinary levels, claiming that President Obama is trying to wipe out Americans by allowing migrant children to bring disease and culture across the border; that he is trying to bring an Ebola epidemic to the United States; and that soldiers with post-traumatic stress disorder—who he called “a bunch of losers”—are weaklings symptomatic of the forces he believes are destroying the country. He also wants the new Republican Congress to promptly arrest the president.

True to form, Stop the Coming Civil War is replete with the usual right-wing attacks on Obama, who he claims is “a metrosexual”intent on destroying the nation and placing it under a dictatorship. True patriots, he claims, will rise up to resist this.

Indeed, the book is an endless parade of classic far-right conspiracy theories and vicious, factually groundless fear mongering. From the idea that “cultural Marxism”is a force hellbent on ruining the world, to attacks on Obama as a “socialist”president, Savage covers the gamut of far-right conspiracy theories in fine fashion.Perhaps most notable among Savage’s claims is that the Obama administration is preparing to wage a “war on white people”that will give the government a pretext for imposing a dictatorship with global players, including the Roman Catholic Church and Pope Francis.

In the opening chapter, Savage intones:

Right now the nation is a tinderbox that can easily go up in flames, because we’re increasingly under the thumb of an administration that is destroying our two-hundred-year-old tradition of defending our borders, language, and culture and replacing it with a culture of statelessness and corruption.

Savage writes that “we’re living in a nation more divided than any since Lincoln’s presidency, and we’ve entered a time and place that may be as dangerous as it was during the Lincoln years. I worry, though, that as happened in Lincoln’s time, we’re moving not toward expanded freedom but toward civil war.”

Keeping true to that antigovernment line of logic, Savage claims the administration wants to spark such a civil war in order for “this crony government to consolidate the power it has already granted itself through the broad use of executive orders, the power granted to Cabinet secretaries and other political appointees, and the unwillingness of our lawmakers to step in and put a halt to this takeover.”

With our nation divided, the government could marshal all of those on its side—the Transportation Security Administration (TSA), street gangs, the National Guard, a military now purged of patriotic generals and without a command structure loyal to the Constitution--against those who would stand up to the oppression.

While promoting the book, Savage has been more explicit about just who the government will be waging this civil war against: white Americans. “It’s very important to understand this. This entire federal government is geared up to fight a war against white people,” Savage told his listeners recently. He also warned them that the administration is “planning to mow down all you white crackers.”

Along with his fellow conspiracy theorists such as Alex Jones, Savage believes that the global economy is on the verge of a massive collapse that will bring about social chaos and violence, leaving ordinary people with no choice but to submit to a globalist “New World Order” government.

“The United States,” Savage writes, “may well be in the midst of a military, economic, and cultural collapse that is turning us into a country in danger of catastrophic failure and leading to the nightmarish scenario of a civil war.”

Savage claims that the entire Obama presidency is the product of a massive conspiracy: “The financial crash of 2008 was engineered by an elite group of financial professionals in order to help ensure the election of Barack Obama and guarantee the continued complicity of the U.S. government and its cadre of economic advisors,” he writes.

Savage contends that the nefarious driver behind this “takeover” is “cultural Marxism,” a concept that has enjoyed favor on the extremist right for over a decade as an umbrella for conspiracist beliefs that liberals intend to destroy America from within. Anders Behring Breivik, the Norwegian terrorist who slaughtered 77 people during a 2011 rampage, devoted much of his manifesto explaining his actions to his obsession with “cultural Marxism.” Savage, unsurprisingly, claimed that Breivik’s rampage actually was the result of a left-wing conspiracy.

But unlike many of his fellow civil war enthusiasts on the right, Savage only hints at offering any kind of armed resistance to the Obama administration. At one point he says: “We need a national group of Green Mountain Boys,”referring to a “militia group headed by Ethan Allen” he describes.

Mostly, he enthusiastically foments the idea of a modern civil war by claiming that it is liberals and the left who are attempting to force such a conflict on Americans:

The Savage Truth of the matter is that our government is preparing for nothing less than the next civil war. It’s marshaling forces to be used against the American people, but the very divisions that the government is creating are causing many Americans to think about what we must do to resist this government takeover.

There is no small irony in this, given that up to this point, Americans have been hearing in from a variety of conservative and far-right ideologues that a civil war is needed from the right in order to resist the democratically elected Obama administration and its policies.

Indeed, far-right hero Cliven Bundy—the Nevada rancher whose standoff in April with federal agents nearly resulted in a shootout—claimed afterwards to his fellow “Patriots” that the Lord told him that he needed to face down the agents, or the nation would need to “face these arms in a civil war”with the federal government. A speaker at Bundy’s ranch, militia figure Mike Vanderboegh, ranted that “we are still staring a civil war in its bloody face.”

Like his fellow right-wing extremists, Savage makes clear in his book that he too is an enthusiast about the idea of a civil war as a form of political resistance to a democratically elected president. His book’s half-clever conceit—that it’s about heading off a civil war, so that Savage can’t be accused of fomenting civil unrest—rests entirely on the risible contention that Obama administration policy is intended to inflame tensions and drive angry Americans to violence.

There is a well-known psychological term for this: projection.