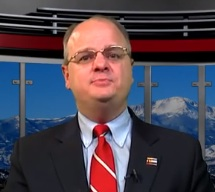 Former Navy chaplain Gordon Klingenschmitt, who calls himself “Dr. Chaps” and claims he exorcises demons out of LGBT people, is now a state legislator in Colorado Springs, Colo.—part of a landslide of Republic wins during last Tuesday’s election.

Klingenschmitt captured nearly 70 percent of the vote in the heavily Republican District located in El Paso County, on the eastern side of Colorado Springs.

But Klingenschmitt isn’t your usual conservative.

He heads up the Pray in Jesus Name Project, which is listed by the Southern Poverty Law Center as an anti-LGBT hate group. Klingenschmitt himself is perhaps best-known for his attempts to exorcise demons out of various people (including President Obama), as well as his numerous false claims and bizarre statements about homosexuality.

“In my opinion,” retired Republican state senator Andy McElhany told the Colorado Springs Independent, “Klingenschmitt has no business in public office because he’s more than extreme.”

The voters of Colorado's House District 15, however, appear to think differently.