Two members of a Georgia-based militia group were each sentenced today to serve 10 years in prison for their involvement in an antigovernment plot to make the deadly poison ricin and disperse it in several cities.

Samuel J. Crump, 71, and Ray H. Adams, 58, were convicted by a federal jury last January in Gainesville, Ga., on a pair of charges connected to possession of ricin for use as a weapon. Both men faced possible life terms. Prosecutors recommended they each serve 20 years.

“This is not some laughing old guys talking kind of thing,” U.S. District Judge Richard W. Story told the defendants at the sentencing hearing, The New York Times reports. The judge said the defendants clearly were involved in criminal conduct “that could have hurt innocent people if you had been able to carry it out.”

The pair, along with alleged ringleader Frederick W. Thomas, 73, Emory Dan Roberts, 67, were arrested by the FBI on Nov. 1, 2011, after two informants secretly taped 400 hours of discussions of plans for dispersing ricin powder from speeding cars in Washington, D.C., Atlanta, Jacksonville, Fla., and New Orleans. 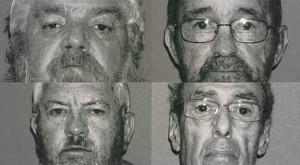 Roberts and Thomas both pleaded guilty in April 2012 to charges of conspiring to possess explosives and firearms and both were sentenced to five-year prison terms.

Federal investigators say Adams had the key ingredient to make ricin – castor beans – hidden in his Toccoa, Ga., home, and that Crump had provided a sample to an FBI informant during the investigation.

The underlying motivation, beyond the defendants’ sheer antigovernment agenda, was never fully made public.  Neither Crump nor Adams took the stand in their own defense during their jury trial.  The panel returned its guilty verdicts in just 90 minutes.

Charging documents said Thomas expected some kind of action by the federal government that would require a response from citizen militia groups.

On the recordings, Thomas discusses his “bucket list” of government employees, politicians, corporate leaders and members of the media” he believed needed to be assassinated to save the country, the documents alleged. The secretly made tape recordings revealed that list included U.S. Attorney General Eric Holder.

At sentencing, both men told the court they never really intended to use the deadly poison.

“I would not have hurt anyone,” Adams told the judge, according to the Times report. Adams added, “I get angry at the government sometimes, but no more than anyone else.”

Crump was more defiant and asked the judge for a new trial, claiming the government’s informants had credibility issues. “There were only words, no actions,” he said. “The only thing I did was talk,” Crump told the court, according to the Times.