John Abarr has an idea for the Ku Klux Klan that has attracted a lot of attention: He says he wants to reform the hate group to make a more “inclusive” KKK open to Jews, black people, and gays and lesbians—a “Rainbow Klan,” as it were. 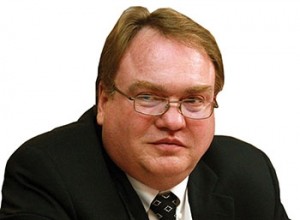 There’s just one problem: While Abar has had no problem attracting media coverage, his Rocky Mountain Knights of the Ku Klux Klan doesn’t appear to have followers beyond a handful, and he has zero credibility within the national Klan organizations.

Word of Abarr’s idea appeared in a story in the Great Falls Tribune, which featured Abarr holding forth on the idea of a kinder, gentler Ku Klux Klan: "The KKK is for a strong America," he told the paper. "White supremacy is the old Klan. This is the new Klan." The story then appeared in USA Today, and inspired a round of stories in the Washington Post, the U.K.’s Daily Mail, the International Business Times, The Forward and Think Progress.

A recent ABC News piece, however, cast a skeptical note, quoting Rachel Carroll-Rivas, co-director of the Montana Human Rights Network, who has monitored Abarr’s various activities since he distributed racist flyers agitating for “white homeland” in the Northwest, and ran for Congress as a Klan candidate.

Carroll-Rivas told Hatewatch that, as far as her organization can tell, Abarr is pretty much just a one-man bandwagon.

“We’ve seen no evidence that he has a membership or following as far as any version of a KKK group, affiliated or not,” she said. “I think Abarr primarily is pretty much by himself."

This is not Abarr’s first foray in grabbing headlines, however. In 1989, when he was the 19-year-old campaign spokesman for white-supremacist candidate William Daniel Johnson during a failed bid for the Wyoming congressional seat of Dick Cheney, Abarr told reporters then that the Klan was "basically a civil rights organization that stands up for the rights of white people."

Twenty-two years later, Abarr ran for Congress in Montana, though he shuttered his campaign after only six months. More recently, Abarr again grabbed headlines by holding a meeting with members of the NAACP at a hotel in Wyoming, claiming he wanted to find a way to get along with blacks.

“They’re all media gimmicks,” Carroll-Rivas said. “Clearly it’s not real. He’s just trying to figure out a way to get in there between the lines.”

The “inclusive” Klan notion is risible, she added.

“I think he’s a farce in terms of what he’s saying right now,” she said. “What he’s doing is somewhat self-promotion, but I also think he’s happy to spread the word of hate, and find a way to bring it attention.”

Indeed, Abarr’s concept was largely met with roars of laughter and general disbelief at the white-supremacist website Stormfront, where a thread devoted to the Tribune story attracted a large number of comments:

What can I say? This is the most ridiculous thing I have heard of. What next? (Corn Feed White Boy)

This is crazy, you sure this is a real kkk ? (laidbackguy71)

Even looks like a f--. Kick him out in the black part of Denver...with his "robe" on, assuming they even retain that. (Buzz)

Sounds like some pervert joined a klan under false pretenses and got tired of wearing women's clothing behind closed doors and going to gay bars with fake mustaches. (Paladin Steel)

One group doesn't speak for all, this is nothing but anti-Klan propaganda and anyone falling for this is a fool. (Central Michigan)

One Stormfront commenter queried among his fellow white supremacists whether any from Montana even knew of Abarr or had heard of them. One, a “white nationalist” from Columbia Falls, replied: “Nope, he has nothing to do with anyone I know.”

Carroll-Rivas observed that the reason Abarr is able to manipulate the press is that people are well aware what the Klan really stands for.

“It goes to show how strong that label still is, the KKK,” she told Hatewatch. “And I think he understands the power that that label has. And it should, because it instills fear in people, for real reasons.”