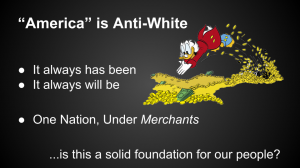 A slide from Matthew Heimbach's presentation.

The lightning rod was a presentation by Matthew Heimbach, co-founder of the Traditionalist Youth Network, who addressed attendees with calls for “#DeathToAmerica.” But his presentation, his second in recent years, caused a stir, particularly among the old guard.

Rehashing many familiar white nationalist talking points including a Jewish controlled U.S. federal government and a strident critique of affirmative action, Heimbach’s speech also visited less familiar ground, depicting an America that was born out of a secret partnership between the Free Masons and the Jews—one that has come to be a collection of individuals bound together only by money-worship and meaningless, government documentation.

While his presentation earned praise from the likes of Don Black, the founder of Stormfront, who personally invited Heimbach to the conference, others were not as pleased and voiced such displeasure that Black had to cancel a scheduled question-and-answer session at the conclusion of Heimbach’s presentation. Others took to the Internet with their gripes.

Pastor Thom Robb, former leader of the Knights Party and a well-known Christian Identity preacher and founder of the Soldiers of the Cross Training Institute, a summer camp for children to foster the tools for them to “fight for our racial redemption,” was insulted by Heimbach’s presentation.

“He was fundamentally wrong on several things and his presentation was unschooled,” Robb wrote on a Stormfront thread a week later. “Speakers should be experienced, grounded, mature and employ wisdom, otherwise they will never inspire others or be able to give a vision for others to grasp.”

He added, “Perhaps Matt will someday, becomes [sic] those things, but until then he needs to humble himself and seek wisdom both of which he, at this time, lacks.”

Robb had additional reason to be upset with Heimbach. As Robb led a prayer at dinner immediately following the presentation, Orthodox attendees, including Heimbach, reportedly interrupted his grace with a prayer of their own.

The issues with Heimbach’s ever-evolving extremism go far beyond his presentation, and, in fact, have garnered him support with other groups on the radical right, namely the League of the South (LOS), the neo-Confederate group where Heimbach began his racist journey.

Heimbach was recently promoted to Assistant Head of the Training Department within the LOS, a new branch of the LOS focused on creating materials to give to new members to help them understand “Southern Nationalism” and the objectives of the neo-confederate hate group. Those objectives, according to LOS President Dr. Michael Hill in the essay “Our Survival As A People,” include fighting “the ultimate compromise of racial extinction through miscegenation.”