A collection of citizens in the small resort town of Whitefish, Mont., banded together earlier this week to demand that their local town council take action to deal with the effects of the presence of a nationally prominent white-nationalist organization in their midst.

Calling themselves Love Lives Here, the group packed the Whitefish City Council chambers on Monday night to demand the council pass an anti-hate ordinance that would bar such groups from assembling in the city.

The object of their ire was Richard Spencer and his National Policy Institute, a hate group that is one of the leading exemplars of academic racism. Spencer moved his national headquarters to Whitefish from Washington, D.C., several years ago. 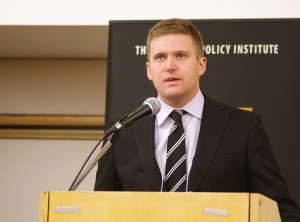 Spencer’s activities in Whitefish recently surfaced in the public eye due to an article in The Daily Beast describing an encounter between Spencer and former John McCain adviser Randy Scheunemann on the ski lift at Big Mountain, the resort that dominates Whitefish. According to the article, Spencer “berated” Scheunemann for “being a neocon and for believing in this whole democracy BS.”

Over 100 Whitefish residents on Monday night voiced concern that the presence of Spencer and his organization would lead to their town being identified with his brand of hatemongering.

"We are committed to co-creating a caring, open, accepting, and diverse community, free from discrimination, and dedicated to the equal treatment of all citizens," Ina Albert, one of the Love Lives Here co-founders, said, according to a report from KPAX-TV. "The idea of hate and discrimination has no place in Whitefish, and I hope you can figure out a way to say, 'we will not accept it in our town.'"

“This isn’t about one individual, it is about a way of thinking that is despicable,” said Brian Muldoon, a Whitefish attorney. “This community I believe is standing up strongly against the kinds of ideas that Richard Spencer and his ilk promotes … and it is time to deconstruct the ideas that are so insidious. It is time to take a very clear stance. An unambiguous one.”

The council was sympathetic and promised to take action. Councilor Richard Hildner, choked with emotion, told the audience that “hate, racism, bigotry are not community values in Whitefish.”

“I promise you I will do everything I possibly can to see that we protect the citizens of Whitefish. I want you to know you have my pledge,” Hildner added, to a round of applause.

Spencer was defiant. “I’ve been coming to Whitefish for more than 10 years now,” he told the Whitefish Pilot. “At no point have I published an opinion on local politics, held meetings with local or state politicians, or engaged in civic activism of any kind.”

“Whitefish is a place where I go to get away from it all. I have no desire to do anything that changes the community that I love, nor has my organization ever considered establishing a permanent facility or residence in Montana.”

However, according to Whitefish residents interviewed by Hatewatch, there is concern that Spencer in fact is planning to construct a large new center for his organization in the town, and part of their action on Monday was aimed at forestalling that possibility. According to the Pilot, he already is a partner in the development of a mixed-use building in the city’s Railway District, not far from Montana’s only Amtrak terminal.

Spencer denied adamantly in a friendly article in the nearby Kalispell newspaper, the Daily Inter Lake, that he was engaged in hatemongering.

“When people call you a hate group, it means they hate you,” he said. “They’re looking at a mirror reflection ... They clearly think more about me than I think about them. I don’t harm anyone; I haven’t challenged or provoked them.”

He then went on to explain to the interviewer the virtues of eugenics and a white ethno-state.

Spencer has spoken frequently about creating a “white homeland” in North America, and like his Flathead Valley neighbor Chuck Baldwin, has at times suggested that racist white people retreat to wide-open spaces such as those in Montana, where relatively few minorities reside, to create it.

Last year Spencer spoke at a gathering of academic racists about his hopes for a “peaceful ethnic cleansing” that would clear parts of North America for Caucasians, meanwhile suggesting that the new state welcome white refugees from Europe. Spencer advocated a “sort of white Zionism” that would infuse whites with the dream of such a homeland just as Zionism helped spur the creation of Israel. “It is perfectly feasible for a white state to be established on the North American continent. Action is the easy part,” Spencer opined, adding, “I have a dream.”

The Flathead Valley has had several brushes with right-wing extremists over the years. Love Lives Here was founded in 2010 when a group of neo-Nazis showed Holocaust-denial films at a Kalispell theater.

Several years before that, local residents organized resistance to a campaign of violent harassment of local environmentalists that was being organized in part through a right-wing radio station. The campaign came on the heels of the arrest of a local extremist named David Burgert for his plot to assassinate local police and political leaders.