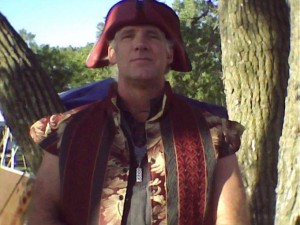 A man who went on a shooting spree last week in Austin, Tex., firing at government buildings and a police headquarters, was a “homegrown American extremist” with “hate in his heart,” the city’s police chief said.

Larry Steve McQuilliams, 49, also appeared to have been a devotee of a doctrine known as the Phineas Priesthood, an ideology that believes violence to be divinely justified if used against race-mixers, gay people, abortion proponents and others.

“He is a homegrown American extremist,” Austin Police Chief Art Acevedo said Monday at a news briefing in the Texas capital city. “Hate in his heart was part of his problem. … What keeps me up at night is these guys—the lone wolf.”

McQuilliams was killed from a bullet wound to the heart outside the Austin police headquarters after firing more than 100 rounds at that building, the nearby U.S. Courthouse and the Mexican consulate. He also used propane cylinders in a failed attempt to firebomb the consulate. No one was injured in McQuilliams' attack.

A police sergeant who was holding the bridle-leads to two mounted patrol horses fired the shot that killed McQuilliams, who had written “let me die” across his chest before the 2 a.m. Black Friday shooting spree in downtown Austin.

Police noted that McQuillliams, who considered himself a “High Priest” in the Phineas movement, apparently acted upon his extremist beliefs as a lone wolf.

“No one helped him. There’s not a larger conspiracy at all,” Christopher Combs, FBI special agent in charge, said at the press briefing, according to The Associated Press.

The Washington Post also reported that while police could not determine a motive for the shooting, which left only the gunman dead, federal investigators said McQuilliams "had previously told friends he was upset he couldn’t find a job, even as immigrants to the United States receive assistance."

During a search of the shooter’s apartment, Acevedo said officers recovered multiple weapons, hundreds of rounds of ammunition, a water supply and a map of 34 downtown buildings, including two churches. Police also found a copy of the book, Vigilantes of Christendom, and a laid out a set of clothes and a note directing that they be used for his funeral, according to media reports.

Vigilantes of Christendom was authored in 1990 by Richard Kelly Hoskins, outlining the philosophy behind “the Phineas Priesthood.” The ideology refers to an Old Testament story of an Israelite priest who claims he was directed by God to use a spear to kill a man and a woman of different races who were having sex.

Hoskins claimed in his book that the Phineas Priest concept lives on. In fact, that claim seems to be supported over the past three decades with isolated crimes, including murders, bombings and other violence, committed by white supremacists and extremists.

“It makes little difference whether you agree or disagree with the Phineas Priesthood,” Hoskins says in the foreword of his book. “It is important that you know that it exists, is active, and in the near future may become a central fact in your life.”

Phineas priests “believe that their God has called them to their dangerous work” and “they multiply and thrive when law and order break down.”

“The simple fact is—one who is willing to give his life for what he believes cannot be ignored,” the foreword concludes.

Authorities have not disclosed—if they know—where McQuilliams first came in contact with the Phineas philosophy, but it may very well have been during his time in federal prison where assorted white supremacists follow the ideology.

The Austin police chief said McQuilliams was arrested for drunk driving in 1998 and aggravated robbery in 1992. The following year, he was sent to federal prison for bank robbery, and was released in 2000, the Austin newspaper reported.

Long-time racist August B. Kreis III, who headed a splinter faction of the neo-Nazi Aryan Nations, said in 2012 he was handing the operation off to Pastor Drew Bostwick. He renamed the organization “Tabernacle of the Phineas Priesthood-Aryan Nations,” but it appears to have been largely inactive.

McQuilliams also isn’t the first Phineas Priest to lash out with violence. In 1999, Buford O’Neal Furrow Jr., then 37, wounded five people at a Jewish community center in California as a “wake-up call to America to kill Jews.”