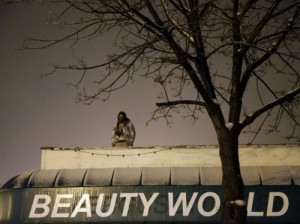 An Oath Keeper stands atop a business in Ferguson, Mo. (Source: Oath Keepers.)

Local authorities have intervened and demanded that the Oath Keepers, an antigovernment group comprised of former military and law enforcement personnel, cease providing security for several Ferguson, Mo., businesses in the aftermath of a grand jury decision not to indict the white police officer who killed Michael Brown.

In a public statement, the St. Louis County Police Department confirmed that the Oath Keepers had travelled to Ferguson and begun “walking the rooftops of businesses” with “semi-automatic rifles” “for the purported reason of providing security to local business during the civil unrest in the area.”  In so doing, police say, they broke the law.

“[T]he individuals from the group did not adhere to St. Louis County ordinance regulating security officers, couriers, and guard,” a statement the St. Louis Police Department provided Hatewatch said. The ordinance “prohibits anyone from providing security without first obtaining a license."

The patrols in Ferguson—which do not appear to have been conducted by licensed guards—were organized by Sam Andrews, a former Defense Department contractor who is now a weapons engineer in the St. Louis area, The New York Times reported. Andrews’ voicemail box was full on Wednesday, so requests for comment could not be left.

The Oath Keepers’ armed presence in Ferguson is at least the third time in recent history that members of the group have come heavily armed to complicate already intense situations. In 2011, members of the group descended on the small town of Quartzsite, Ariz., to protect citizens from what they feared would soon be state-imposed marshall law as a fight erupted between the mayor and the police chief. Then, this April in Nevada, Oath Keepers backed scofflaw rancher Cliven Bundy as he stood down the federal government over $1million in contested grazing fees.

But in Ferguson, which has been the site of rioting in the aftermath of a grand jury decision not to indict a white police officer who killed a black teenager, the Oath Keepers have served a function more closely in line with that of a private militia––a service they have historically denied they provide.

“Oath Keepers are individuals that come from first responder backgrounds—military, law enforcement, fire fighters, paramedics—they’re the individuals that put themselves in harms way to keep others safe,” John Karriman, an Oath Keeper, told Fox & Friends yesterday. But what Karriman did not address is the ideological reality behind the Oath Keepers mission.

Since its founding in 2010 by former Army paratrooper and Yale-educated lawyer Elmer Stewart Rhodes, who hoped his Oath Keepers would be a first line of defense against the New World Order, the Oath Keepers have put themselves deep into the heart of the antigovernment movement. The group’s “Orders We Will Not Obey” are theoretical worries, including fears that the federal government will one day call upon the police and military to disarm and imprison U.S. citizens, that have adopted by many “Patriots.”

But in nearly four years since its formation, the group has edged nearer to being just shy of a heavily armed, well-trained paramilitary militia––an alarming trajectory for a group whose members have proven willing to stand against the federal government.

Of course, none of this is true if you ask the Oath Keepers.

“It’s really a broad group of citizens, and I’m sure their motivations are all different,” Andrews told The Times. “In many of them, there’s probably a sense of patriotism. But I think in most of them, there’s probably something that they probably don’t even recognize: that we have a moral obligation to protect the weakest among us. When we see these violent people, these arsonists and anarchists, attacking, it just pokes at you in a deep place.”