Rare is the day that I am shocked by something I read online. After all, I spend hours each day immersed in vile racist and anti-Semitic material. That’s my job. But a recent, particularly twisted article by Colin Flaherty on the website American Thinker was really just too much.

Flaherty’s piece, “Black Crime Claims Life of Apologist for Black Crime,”published yesterday, reveled in the tragic death of David Ruenzel, who was fatally shot in late November in a botanical park in Oakland Hills. News reports say robbery may have been the motive.

Ruenzel, an English teacher, wrote a few posts on white privilege and other topics for the Southern Poverty Law Center’s esteemed Teaching Tolerance project back in the late 1990s. He was much better known for his expertise in education, which was demonstrated through the many articles he wrote for education publications. According to one obituary, Ruenzel was most interested in “the mission of developing students' intellectual curiosity.”

But for Flaherty and the others at American Thinker, Ruenzel’s work against racism was proof that he deserved what he got. The gist of Flaherty’s piece is that Reunzel is to blame for his own death; in fact, his work on white privilege is “what killed him.”

See, in Flaherty’s twisted mind, pointing to the advantages that white people have is actually providing cover for what he calls “black mob violence and black criminality.” In other words, by discussing the wrongs of racism or the advantages of white people, what Reunzel was really doing was providing cover for black people whose only apparent goal, according to Flaherty, seems to be violence against white people. He calls Ruenzel an “enabler of black violence.”

I’m not really sure what to say about something so sick and wrong, except that once in a while even I can’t stomach what I read for work. The first thing that comes to mind, though clearly far from original, is “have you no decency, sir?” Clearly, Flaherty does not.

What he does have are allies in all the wrong places—racist cesspools like the hate forum Stormfront. The thread there on Flaherty’s post is literally celebratory.

Who exactly is this Mr. Flaherty with so many Stormfront fans? Well, he’s not as obscure as one would hope. 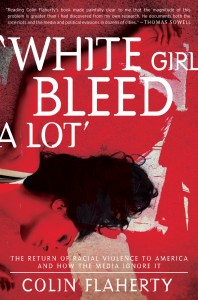 According to his American Thinker byline, Colin Flaherty is the author of the Amazon #1 Best Seller: White Girl Bleed a Lot: The return of racial violence to America and how the media ignore it. The book, published by the crazed conspiracy theory site WorldNetDaily, says it documents “black mob violence,” a favorite topic of racists nationwide who see themselves as the victims of a race war against white people.

I expect that guttural nastiness to appeal to Stormfronters. But Flaherty’s “work” on black violence apparently has friends in higher places. His book is endorsed by former Congressman Allen West, former far right radio host Neil Boortz, and The National Rview’s Thomas Sowell.

Now that is truly tragic.