In the wake of last week’s black riots in Ferguson, Mo., conspiracy theorists from the far-right antigovernment movement have whipped themselves into a frenzy over the prospect of a nationwide “race war,” though it is difficult to tell whether they fear such a prospect or are actively hoping for it.

In truth, the notion that Obama is inciting a race war in America has been floating around the extremist right almost since the beginning Obama’s presidency. Right-wing pundit Wayne Allyn Root theorized along similar lines when the situation in Ferguson first erupted this summer. Gun-rights extremist Larry Pratt has argued for some time that Obama’s immigration policies are intended to provoke a race war. Some anti-immigration extremists accused Obama of intending to spark such a conflict with his executive order on immigration.

But leading the parade has been Alex Jones, whose radio broadcasts for the past week have focused on the civic unrest erupting nationally after a grand jury ruled not to indict a white police officer for the shooting death of Michael Brown in Ferguson this summer.

Jones’ theory is that President Obama and the media are combining forces to stir up so much racial unrest that it will give them a pretext to declare martial law and impose a dictatorship. Joining Jones in this theory have been right-wing pundits such as Austin Miles at Renew America; radio host Rick Wiles; onetime presidential candidate Alan Keyes; and Glenn Beck, who has been pitching a version of the theory for over a year now.

Jones laid out his version of the theory for listeners on Monday, noting that he had been issuing warnings about this possibility for some time:

They [globalists] want to cause a civil war in order to go confiscate the guns, and then we are forced to defend ourselves and then it kicks off, and the police and military get taken out, along with the Patriots, in a civil war against each other. … This is the grand game. This is divide and conquer. This is what I have warned you about thousands of times, no exaggeration.

Jones, citing a Time magazine op-ed piece justifying riots as an expression of civic anger, explained that the media has been complicit in this conspiracy, using race to attack Obama’s critics while whipping up anger in the black community:

That’s what’s going on: Media nationwide is pushing race war. That’s all they’ve got. Don’t like Obamacare, you’re a racist. Don’t want to turn your guns in, you’re a racist. Michael Moore – ‘if you own guns and you’re white, it’s because you’re scared of black people.’ That’s a quote from CNN. This is all they’ve got, while these big foreign banks that own the country loot the treasury with bailout money, Obamacare scamming everybody, Obama opening the borders up, giving free welfare to tens of millions of people, all these unconstitutional scams happening. And all they’ve got is getting us to fight with each other.

Jones has frequently attacked law enforcement around the nation for their supposed attacks on American civil liberties, typically in cases involving gun owners and right-wing extremists. At the same time, most of his reporting about Ferguson has focused on the supposed violent depravity of the demonstrators and the need for police intervention. 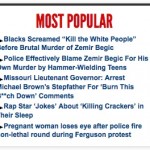 Indeed, the most popular stories at Jones’ InfoWars website so far have featured such headlines as “Blacks Screamed ‘Kill the White People’ Before Brutal Murder of Zemir Bergic” and “Rap Star ‘Jokes’ About ‘Killing Crackers’ in Their Sleep.” The effect of this barrage of dubious information is to whip up fear of an imminent civil war featuring hordes of rampaging black people.

And there are others with variations of the idea.