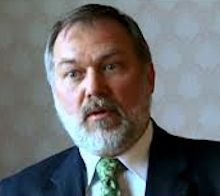 A federal appeals court has denied pastor Scott Lively’s petition to dismiss a lawsuit that alleges he violated U.S. law by trying to influence the laws of a foreign country.

The 1st Circuit Court of Appeals in Boston ruled last Thursday against Lively, president of anti-LGBT hate group Abiding Truth Ministries. The lawsuit charges Lively, who is also the author of the discredited Holocaust revisionist book The Pink Swastika, with helping foment anti-LGBT sentiment in Uganda.

With this ruling, the lawsuit will now proceed in federal court.

Filed in 2012 by the U.S. based Center for Constitutional Rights and Sexual Minorities Uganda, a non-profit LGBT advocacy group based in Uganda, the lawsuit alleges that “Lively’s involvement in anti-gay efforts in Uganda, including his active participation in the conspiracy to strip away fundamental rights from LGBTI persons, constitutes persecution.” Specifically, the lawsuit alleges that Lively encouraged government-backed acts of violence against LGBT people through his anti-LGBT rhetoric, particularly remarks he made when addressing members of the Ugandan parliament in 2009.

Lively, 56, has stirred up anti-LGBT sentiment around the world, first traveling to Uganda in 2002. Frank Mugisha, director of Sexual Minorities Uganda, alleged in Mother Jones that the anti-LGBT bill first proposed in Uganda in 2009 “is essentially [Lively’s] creation.” Anglican priest and Political Research Associates senior religion & sexuality researcher Kapya Kaoma noted that “These people had never heard of anything called the gay agenda, but Lively told them that these predators were coming for their children. As Africans hearing it for the first time, they believed it was true—and they were burning with rage.”

The 2009 Ugandan bill included life imprisonment in some circumstances and the death penalty for certain acts of “aggravated homosexuality.”

President Yoweri Museveni signed a version into law earlier this year that calls for life imprisonment as the maximum penalty for “aggravated homosexuality,” which is defined as repeated sexual acts between consenting adults of the same sex, same-sex acts involving a minor, a disabled person or a person infected with HIV. But in August, Uganda’s Constitutional Court annulled the legislation, ruling that the bill was passed by members of parliament without the requisite quorum and was therefore illegal.

Some MPs have reignited the battle to pass the bill, with calls to pass it as a “Christmas gift for the people of Uganda.”

This is the first known Alien Tort Statute case that seeks accountability for persecution on the basis of sexual orientation and gender identity.