It was a moment of remembrance for the racist right.

Last week, about three dozen racists gathered on Whidbey Island, Wash., to mark the 30th anniversary of the death of Robert J. Mathews, who founded a band of white supremacist terrorists intent on starting a race war called The Order. Members of The Order had fled to the island after a gun battle days earlier with FBI agents at a motel in Portland, Ore.

At the cabin, Mathews refused to surrender to the FBI, which later fired flares into the building to force him out. Matthews refused to leave, and died in an inferno when the cabin caught fire.

Because of Mathews' unwillingness to surrender, he is widely regarded now as a martyr for white nationalists and racists, who annually visit Whidbey Island as part of a pilgrimage of sorts. This year was no different, attracting racists mostly from the Northwest Hammerskins, considered one of the most violent skinhead groups in the country. 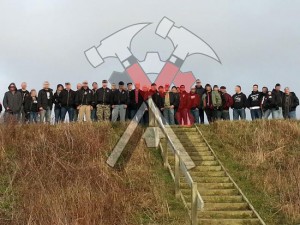 A photograph posted on a white supremacist blog honoring Mathews and other members of The Order showed almost three-dozen attendees, their faces pixelated, beneath a Hammerskins crossed-hammers logo. The photo included the caption: “December 8th 2014 - NWHS and friends at Whidbey Island for Martyrs Day! Robert J Mathews!”

In the spring of 1985, just a few months after Mathews’ death, several members of The Order were indicted in nearby Seattle on federal racketeering charges, covering murders, armed robberies, counterfeiting and other crimes  the neo-Nazi gang committed in its failed attempt to start a race war.