In one of the spacious meeting rooms of the Russell Senate Building in Washington, D.C., last month, three conservative members of Congress had an unusual meeting with a small group of law-enforcement officers who ascribe to far-right “constitutionalist” theories. 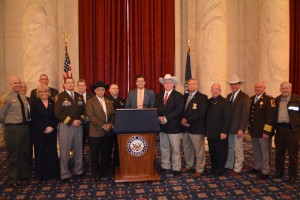 U.S. Sens. Jeff Sessions, R-Ala., and David Vitter, R-La., and Rep. Martha Blackburn, R-Tenn., all met with former Arizona Sheriff Richard Mack, the far-right former lawman from Graham County, Ariz., who now leads the Constitutional Sheriffs and Peace Officers Association (CSPOA), a group of “constitutionalist” sheriffs who see themselves the last line of defense against those who would seek to infringe on the U.S. Constitution.

Originally billed in the National Review as a “massive gathering” of sheriffs from around the nation to protest immigration, the event was organized by two sheriffs who are active leaders in former Mack’s CSPOA and drew a much smaller crowd. And while CSPOA promoted the event and reported on it afterward, Mack told Hatewatch that it was not the chief organizer.

“I was invited to attend and we provided a little hors d’oeuvres,” he told Hatewatch. Still, he said, “I was really proud of these sheriffs for trying to take care of something on their own.”

The focus of the event was to stand in protest of President Obama’s executive action, taken after years of congressional inaction, to offer temporary legal status to undocumented immigrants who have been in the country for at least five years and whose children were born here and are U.S. citizens, provided they pass a background check and pay taxes. But it wasn’t long before a group of extremists supporting Mack made itself known.

Just down the Capitol Mall that same day, a small group of protesters supporting the sheriffs gathered at the White House and began shouting slogans and demanding the removal of President Obama. Some in the crowd demanded the president be lynched--"Hang the lying Muslim traitor!” one of them shouted.

The same group of protesters then proceeded to the Senate building where the sheriffs were meeting, but were not permitted inside and instead lingered in the foyer. When the meeting ended, the demonstrators lustily greeted the emerging law enforcement officers and Congress members, some of them shaking hands and hugging the participants.

Mack told Hatewatch that he was unsure who organized the supporting protest. But he stressed, “That was not us.”

Obama’s executive action, taken after years of congressional inaction, offers temporary legal status to undocumented immigrants who have been in the country for at least five years and whose children were born here and are U.S. citizens, provided they pass a background check and pay taxes.

The rhetoric used by the various officials during the press conference that followed was not nearly as incendiary, but it also reflected some of the paranoia inherent in the “constitutionalist” movement--even though some of it was coming from U.S. senators.

Obama's executive action “is taking jobs and benefits directly from struggling American lawful immigrants and our native-born,” Sessions said. “A government must serve its own citizens."

The sheriffs were largely on the same page. “When it comes to immigration, there is no law because there are no consequences, and that is something we in law enforcement have to deal with and have to fight,” Paul Babeu, sheriff of Arizona’s Pinal County, said. “Instead of putting illegals first and their rights, what about putting Americans and our rights and our security once, first?”

But what measure and reserve was on display inside the Senate Building was not apparent outside the White House.

That rally organized by an antigovernment group calling itself Operation American Freedom,” which had issued an “arrest warrant” to government officials in Washington earlier this year--was intended to support the sheriffs. An earlier video by Blaine Cooper, a “Patriot” who help organized a livestream of the event, announced that “we are gonna be at the White House at 10 o’clock tomorrow. The sheriffs are gonna be here doing their rally, and Operation American Freedom, or O.A.F., are gonna be there as well.”

Cooper’s livestream video also provided an unusual inside look at the protest.

There appear to have only been a couple dozen gathered to protest. Most of the noise at the demonstration was created by one man, wearing a tricorn hat and shouting into a bullhorn. One protester in particular—a bearded man toting an American flag—seemed especially intent on seeing Obama hung.

“Hang the lying Kenyan traitor terrorist piece of shit,” he shouted at one point. “He’s a traitor! Hang him!” The same man kept shouting variations of this throughout the protest.

When a large wood chipper drove past the scene, one of the protesters remarked: “Hey, a wood chipper! That gives me an idea” – suggesting he would like to run the president through the machine. When the press conference had finished, the participants were swarmed by the sheriffs’ supporters in the foyer, who cheered loudly as they exited and swarmed Sessions to express their admiration.

In the video, Mack could be seen embracing a man with the tricorn hat as he departed. However, he could not tell Hatewatch afterwards anything about the man or the group: “I didn’t know if they were pro or con,” he said via e-mail.

Afterward, Mack was less than optimistic about the outcome of the event.

“My overall feeling was that Washington D.C. wasn’t going to do anything to enforce the law or fix the problem,” he said. “I don’t believe the leadership will allow the problem to be fixed. … And it’s really a slap at the black community that so many millions are going to be competing with low income minority groups for jobs. I don’t think there is any way around that. The president has once again shown that he’ll do anything he wants, whether its lawless or not, no matter who it hurts.”