A group of white separatist activists is going hood … oops … hat in hand, trying to raise money to put up a racially charged billboard in an undisclosed northern city to go along with similar sign in such southern locations as Harrison, Ark., and, more recently, Springville, Al. 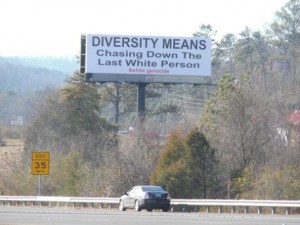 The Alabama billboard, which looms above a knot of trees about 15 miles north of Birmingham on I-59, says “Diversity Means Chasing Down The Last White Person.”

The group – the so-called White Genocide Project – said on its website today that the Springville sign is “the second White Genocide billboard to go up in Alabama.” The first billboard appeared near Leeds in the spring of 2013 and repeated the white nationalist mantra, “Anti-Racist is a code word for Anti-White.”

After complaining that the media “love to call us ‘supremacist’ because it conjures up images of street gangs with swastikas tattooed on their foreheads” – the group asked for money.

“If you’re tired of tripping over your stacks of cash, how about donating to the ‘Diversity is a codeword [sic] for White Genocide’ billboard project? To get this billboard up in the Northern US they need another $3,500.”

It is unclear who is behind the group or who paid for the billboard. Robert Whitaker, the curmudgeonly segregationist who wrote the 221-word white nationalist mantra that has recently become incredibly popular, today told Hatewatch that he does not know who is responsible for putting up the Springville sign, but that he “is happy and proud” that he has had an influence on spreading the alarm about “white genocide.”

“People are afraid to say anything,” Whitaker said. “Everybody but me has to be anonymous.”

The racially charged billboard near Leeds was the idea of a member of the League of the South (LOS), a neo-Confederate group that advocates for a second Southern secession, the group’s president, Michael Hill told an Alabama radio station this fall.

“I guess even racist idiots have freedom of speech,” the mayor of Leeds, David Miller, told Hatewatch. “As soon as the sign went up, we hopped on it and condemned it.”

The sign, the mayor said, stayed up for about a month.

For anyone who might be a white genocide skeptic, the group includes a list of what it looks like, including, “Moving millions of non-White immigrants into a traditionally White countries over a period of years” and “Legally chasing down and forcing White areas to accept ‘diversity.’ This is known as ‘Forced Assimilation.”

“Society is widely aware,” the group adds, “that White people are becoming a minority in several countries, but anti-Whites don’t want us to bring an end to the policies which are turning us into a minority everywhere.”

In a statement about the new billboard, the mayor of Springville, William Isley, said that the city of about 4,000 residents has been working to promote “racial harmony for many years,” adding, “Any message which cuts against such harmony is very disturbing to the City and is inconsistent with the desires and intent of the City government.

“The City,” the mayor’s statement continued, “has no connection or control over the sign at issue and denounces the message thereon as being racially offensive.”