Gavin Seim, the self-described “liberty speaker” who organized last month’s “We Will Not Comply” rally in Olympia to protest a recently approved gun-control law in Washington state, was arrested earlier this month for disrupting court proceedings. 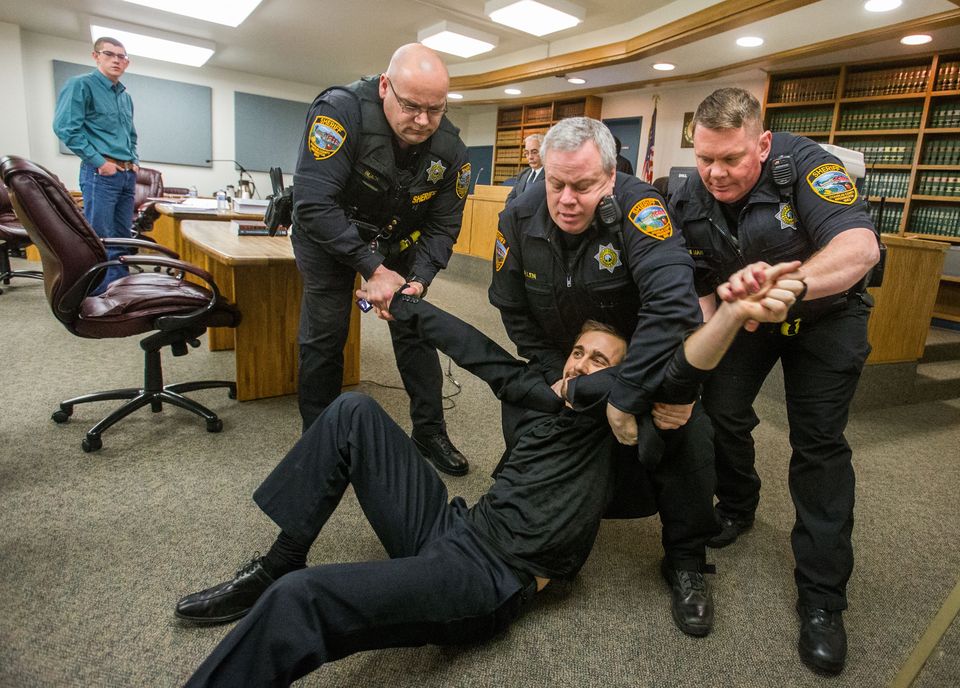 Seim, 29, an ardent proponent of far-right “Patriot” movement theories on constitutional law and a frequent critic of police behavior, was taken into custody along with his 59-year-old father, Grant, by Douglas County sheriff’s deputies on Jan. 15 after a group of about ten protesters disrupted the courtroom of Judge Judith L. McCauley in East Wenatchee.

The protesters were there to observe the proceedings in a traffic case involving Tavis Shasteen, 19, who had been cited in October after being briefly arrested for refusing to give his license information to a deputy who had pulled him over for speeding. Since, Seim had turned the case into an antigovernment cause celebre.

According to the Omak Chronicle, Seim attempted to represent Shasteen in the court proceeding, even though he is not a licensed attorney. Seim also protested loudly when McCauley told the spectators they would not be permitted to broadcast the proceedings online.

“Seim began yelling at the judge and walking toward her bench,” Sheriff Harvey Gjesdal said. McCauley “ordered him removed from the courtroom.”

Seim posted a couple of accounts of the arrest at his website. One, written by his brother Nathan, claimed he was “kidnapped from a courtroom” by the deputies. It also described how various fellow “patriots” in the courtroom stood up and attempted to block the deputies as they carried Gavin Seim out.

In the second account, a day after the arrest, Seim recounted his ordeal in jail, complaining about his treatment there. “Everyone locked in these walls is treated as subhuman, regardless of crime or guilt. Understand that nothing about these halls had anything to do with justice. It’s a dark reflection of the tyrannical system we have allowed outside. It was quite an experience, being in there with my father and that part was a great comfort.”

He concluded: “This battle is the same one as the fight for our guns and our liberty.”

A month before the hearing, Seim had gone to the Douglas County Courthouse to assess the situation. While there, he encountered a court marshal who informed him he’d be required to abide by court rules while in McCauley’s court. This irked Seim a great deal, and he posted a video about it on YouTube two days before the hearing.

“There you go, folks, that is what you call contempt of the citizenry from a public servant,” he said to the camera as he departed. “He deserves no respect whatsoever. We need to stop giving respect to people who think that they are little rulers and kings over the people. They serve us, and it’s time to stop tolerating this foolishness from our servants.”

In the meantime, since being freed on bail, Seim has continued to harass state troopersusing unmarked patrol cars, a cause he has frequently posted videos on YouTube about.